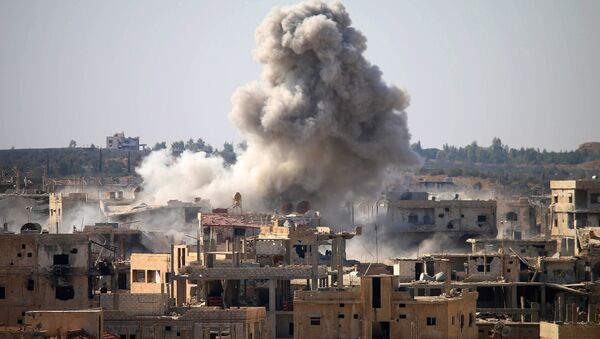 © AFP 2021 / MOHAMAD ABAZEED
Subscribe
Russia has repeatedly stated that the chlorine findings on the liberated Syrian territories prove that terrorists do have toxic agents.

US' Syria Policy is Encouraging False Flag Chemical Attacks, Prolonging Conflict
The spokesperson noted that the militants are going to film the consequences of the alleged use of chemical weapons in order to place the blame for civilian deaths on Damascus and justify breaching the ceasefire in the province of Daraa.

Assad: West Accuses Damascus of Chemical Weapons Attack on Syrian Army
Washington has been continuously threatening with a strike against Damascus in case the chemical weapons are used in Syria. According to the Russian General Staff, provocations will also serve as a pretext for the United States to attack Syria, and Moscow has seen corresponding preparatory moves, including the formation of naval strike groups.