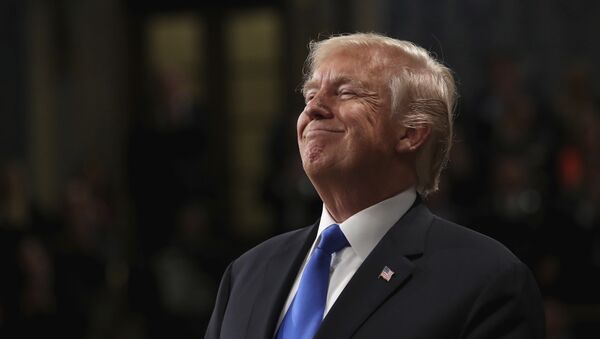 The US Treasury Department has announced sanctions imposed on 38 Russian businessmen and senior government officials, as well as private and state-owned companies over what it called, was Russia's "destabilizing activities" around the world.

White House spokeswoman Sarah Huckabee Sanders stated on Friday that the new anti-Russian sanctions prove no one has been tougher on Russia than the Trump administration. The US president said that Washington seeks good relations with Moscow, but the improvement of ties depends on Russia's actions, according to the statement by Sanders.

"Today’s sanctions and the totality of the administration’s actions which are in keeping with Congress’ wishes prove the president is absolutely correct when he says no one has been tougher on Russia," Sanders told reporters.

The latest sanctions US President Donald Trump imposed on Russia demonstrate his strong leadership and a clear message that the United States will not condone malign activity, Vice President Mike Pence said in a statement on Friday.

Some of the sanctioned government officials include the head of the Presidential Directorate for Social and Economic Cooperation with the Commonwealth of Independent States Member Countries Oleg Govorun; Tula Governor Alexey Dyumin; Russian Security Council Secretary Nikolai Patrushev; presidential aide Yevgeny Shkolov; and Deputy of the State Duma Andrei Skoch.

US Sanctions Unlikely to Affect Russia-India Talks on S-400 Missile Deliveries
Moreover, the Treasury Department sanctioned energy giant Gazprom's CEO Alexey Miller and the heads of the company's subsidiaries; Gazprombank Chairman of the Management Board Andrey Akimov; and Gazprom Neft Board of Directors member Sergey Fursenko.

State Duma Deputy Speaker Pyotr Tolstoy said on Friday the new round of US sanctions is a malicious attempt to dictate Washington’s will to Moscow for pursuing an independent and sovereign policy, and the effort is doomed to fail.

READ MORE: US Intelligence Had Role in New Sanctions Against Russian Businessmen — Reports

Russian Security Council Secretary Nikolai Patrushev said sanctioned businessmen and organizations will find ways to compensate for the sanctions’ potential effect on the economy. Patrushev added the US sanctions created a good potential for economic cooperation with countries other than the United States.