'Google It': NATO Chief on the Alliance's Nuclear Missions 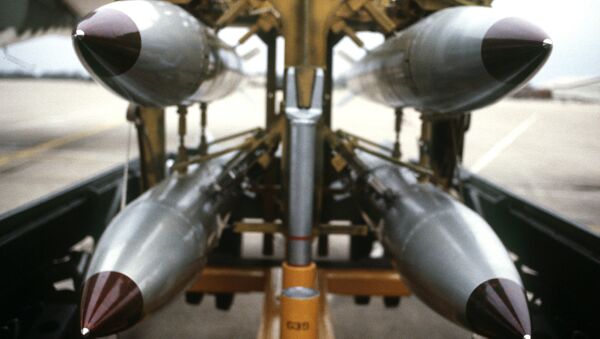 It appears that anyone who wants to learn more about the use of nuclear weapons by NATO members has a better chance of doing so by searching online than by asking the organization’s chief, by his own admission.

During his appearance at Southern Methodist University in Dallas, Texas, NATO Secretary General Jens Stoltenberg has declared that nuclear weapons still remain an integral part of the alliance’s arsenal, but he adamantly refused to say which NATO member states take part in the so called ‘nuclear sharing’ – a concept which involves the non-nuclear members taking part in the planning for the use of nuclear weapons by NATO.

"I cannot comment on which countries are part of our nuclear sharing arrangements, so you can google and you can decide whether you trust the information you read on Wikipedia or not," Stoltenberg said.

Stoltenberg Warns That NATO Watches Russian Naval Drills in Baltic Sea – Reports
He also added that as long as there are nuclear weapons, NATO will remain a “nuclear alliance.”

Earlier Stoltenberg also lashed out against Russia, claiming that the country “is becoming more unpredictable and more aggressive" and allegedly seeks to destabilize the West with new nuclear weapons.

READ MORE: NATO Chief Accuses Russia of Aggression: What Did He Miss?

The secretary general insisted that NATO is "always ready to respond when an ally is attacked militarily," and claimed that "blurring the line" between nuclear and conventional warfare "lowers the threshold for Russia’s use of nuclear weapons."

Only three NATO members — the United States, the UK and France — possess nuclear weapon capabilities of their own. However, Belgium, Turkey, Italy, the Netherlands and Germany reportedly host US nuclear weapons as part of the alliance's nuclear sharing policy.