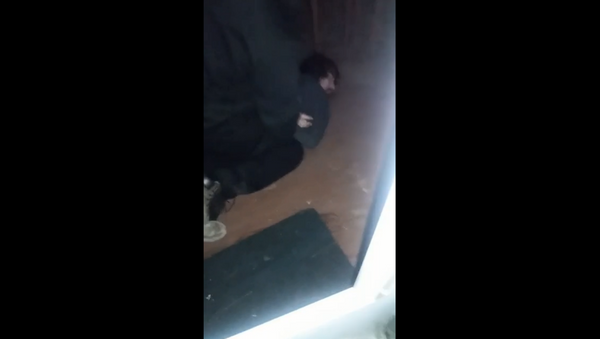 © Screenshot/Jonathen Abrams
Subscribe
International
India
Africa
Jonathen Abrams, boxer and father, saw nothing but red last week after he caught a man trying to break into his Michigan home and lay hands on his daughter.

Speaking to local news station WDIV, Abrams explained that he'd received a call from his daughter on March 30 regarding an intruder in the home they shared, and that once he got back there, his boxing experience — and fatherly fury — kicked in immediately.

"I instantly punched him and he was out cold," Abrams told the station.

The moments following Abrams' heroic beat-down were recorded for the world to see after he went live on Facebook.

"Now before the police get here, if anything happens to me, I caught a motherf**ing intruder coming in here, this motherf**ker grabbed my daughter," Abrams is heard telling viewers. "I had to knock this silly-ass motherf**ker out."

"Now if I get popped, you all see that I got him apprehended. I ain't got no weapon on me," he added, before telling the intruder, later identified as 32-year-old Jacob Cruz, to stop moving.

"F**k is wrong with you coming into my house and grabbing my daughter… you're out of your goddamn mind," he says as Cruz repeatedly tries to look away from the camera.

Abrams told WDIV that even though he was unsure if Cruz had a weapon, he was going to do anything in his power to protect his family.

"At that moment in time, I did the right thing, especially with my children watching me," he noted.

Cruz, who was later charged with breaking and entering, pleaded not guilty in court on Wednesday. He is due back in court later this month.