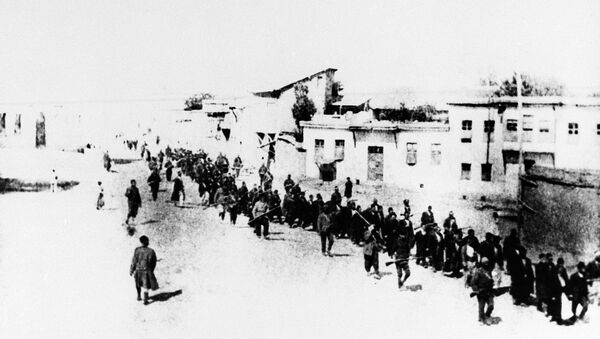 © AP Photo
Subscribe
Many of the weapons used by the Ottoman Empire to carry out the Armenian genocide were from Germany, according to a new report. Germany and Turkey were allies during World War I, on the opposite side to Russia, Britain and France.

"German officers who served in Turkish-Ottoman military staff actively helped carry out individual murders. The majority of the aggressors were armed with Mauser rifles or carbines, the officers with Mauser pistols," according to the report by Global Net — Stop the Arms Trade (GN-STAT).

In 2016 the German parliament, the Bundestag, formally recognized the Armenian genocide, sparking an angry reaction from Turkey, whose Deputy Prime Minister Numan Kurtulmus called it a "historic mistake."

April is #GenocideAwarenessMonth. This unit provides background on the Armenian Genocide and invites students to explore the important questions it raises about how the global community defines, responds to, and can prevent genocide. https://t.co/k3RxQ7dVPS #genprev pic.twitter.com/iauGotQqfg

​Turkey Has Always Played Down Genocide

Around 1.5 million ethnic Armenians were killed between 1915 and 1917 but Turkey has always denied it was genocide and said those who perished were simply collateral damage and not part of any deliberate effort to annihilate them. 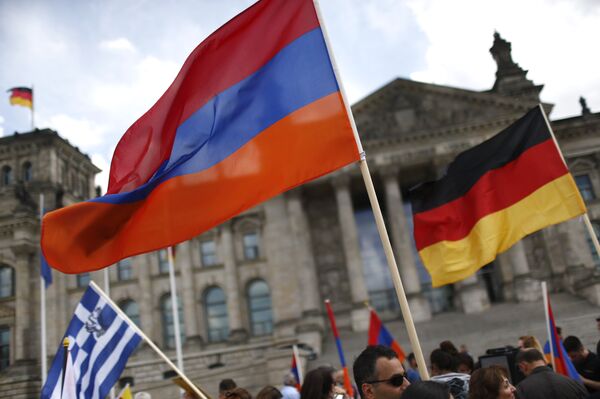 Rally participants wave Armenian and German flags in front of the Reichstag, the seat of the lower house of parliament Bundestag in Berlin, Germany, June 2, 2016, as they protest in favor of the approval of a symbolic resolution by Germany's parliament declaring the 1915 massacre of Armenians by Ottoman forces a "genocide"
© REUTERS / Hannibal Hanschke

When the war broke out the Ottoman Empire decided to side with Germany, largely for strategic reasons because Tsarist Russia was expanding Moscow's influence in the Caucasus region.

The Ottoman Empire was Muslim while Russia was a Christian power and the Armenians, as one of the empire's few non-Muslim minorities, immediately fell under suspicion and were suspected of being a fifth column supporting Russia.

The new report gives great detail about how the Kaiser's Germany, and some of its biggest companies, left their bloody fingerprints on the genocide.

Germany's biggest gun manufacturer, Mauser, supplied the Ottoman Empire with millions of rifles and pistols and Krupp — the forerunner of industrial giant ThyssenKrupp — supplied artillery pieces which were used to blast away at Armenian fighters holding out on the Musa Dagh mountain in 1915.

The report also relays eyewitness accounts by German officers who were embedded with their Turkish allies in eastern Anatolia.

As the originator, it's my honor to inform you that the Interstate 210 freeway signs for the Pasadena Armenian Genocide Memorial have been installed! On average, over 302k vehicles pass on the 210 a day. That's over 100 million each year. #Pasadena #Glendale #ArmenianGenocide pic.twitter.com/hrrKo67BP2

Major Graf Eberhard Wolffskehl, who was serving as chief of staff to Fahri Pasha, an Ottoman commander, witnessed an assault on the large Armenian community in the city of Urfa in October 1915.

Armenians Killed as They Sheltered in a Church

"They had occupied the houses south of the church in numbers," Major Wolffskehl, referring to the Armenians, wrote in a letter to his wife.

"When our artillery fire struck the houses and killed many people inside, the others tried to retreat into the church itself. But they had to go around the church across the open church courtyard. Our infantry had already reached the houses to the left of the courtyard and shot down the people fleeing across the church courtyard in piles. All in all the infantry, which I used in the main attack acquitted itself very well and advanced very dashingly."

"The question of who actually supplied the weapons, not only for the genocide but also for the First World War in Turkey, no one has really addressed that question before, and to what extent German officers took part in murders by actually picking up the rifles and firing them themselves — that wasn't known before," said Mr. Landgraeber.

In 2015 Germany's then President Joachim Gauck acknowledged his country was partly responsible for the Armenian genocide.

GN-STAT is also working on a report into Heckler & Koch's deal to sell guns to several corrupt police forces in Mexico, where they were sold on to narcotics cartels.