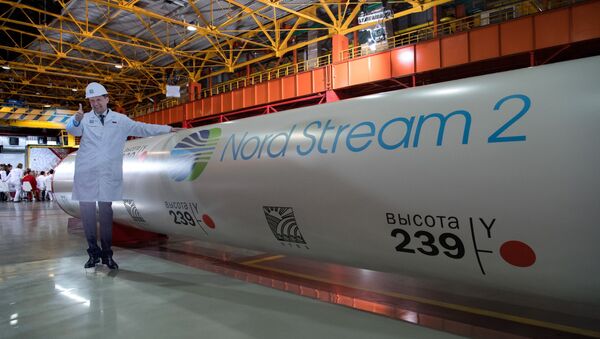 © Sputnik / Sergey Guneev
/
Go to the photo bank
Subscribe
The gas pipeline project Nord Stream 2 has already recieved all the necessary permits in Germany, however, not all European countries welcome the construction of the pipeline.

"We believe that the Nord Stream 2 does not encourage the diversification of gas supply. That is why if the pipeline is built it will not be supported by the EU and the European Commission, in particular," Dominik Ristori, head of the European Commission's energy department said, adding that nevertheless the bloc is not mulling sanctions.

The EU attaches great significance to the gas pipelines going through the Ukrainian territory in context of diversification of supply routes, according to Ristori.

"Gas transition is important for Ukraine in terms of revenues, but it is also important for the EU in the context of diversification of supply routes," he stressed at a press conference in Kiev on Friday.

The bloc's official also pledged that the EU will help Ukraine during the negotiations on transit after the termination of the contract between Naftogaz and Gazprom.

Nord Stream 2 AG, the operator of the Nord Stream 2 gas pipeline project, has already recieved all the requisite permits from Germany. Later, the Finnish government also gave its consent for construction of the pipeline through its exclusive economic zone, though one more permit from Finland is expected to be made within the next weeks.

US Threatens Sanctions Over Nord Stream 2 Gas Pipeline
National permitting procedures in the other three countries along the route – Russia, Sweden and Denmark — are due to be obtained soon.

Some EU countries, including Ukraine and Poland, have continuously spoken against Nord Stream 2, claiming that the project will increase Europe’s dependence on imported Russian gas. Polish Prime Minister Mateusz Morawiecki stated that he hoped that the Nord Stream 2 pipeline between Russia and Germany would be reconsidered, restricted or even canceled.

However, German Chancellor Angela Merkel stressed that she considered Nord Stream 2 to be an economic project which does not pose a threat to EU energy security.

The Nord Stream 2 is a joint venture between Russia’s Gazprom, France's Engie, Austria’s OMV AG, the Anglo-Dutch company Royal Dutch Shell, and Uniper and Wintershall, both German. The project involves the construction of two strings of a gas pipeline with a total capacity of 55 billion cubic meters of gas per year, running from the Russian coast through the Baltic Sea to Germany. The total cost is estimated at 9.5 billion euros.