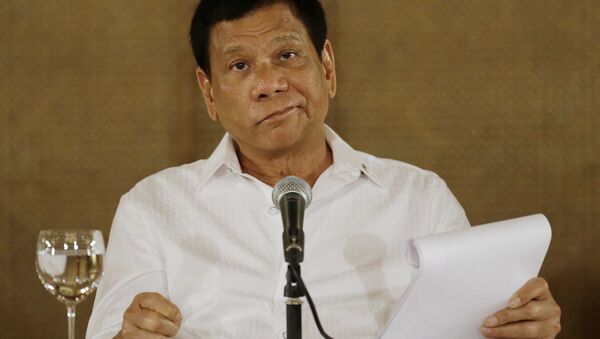 © AP Photo / Aaron Favila
Subscribe
It appears that the flamboyant and tough-as-nails Philippine president might owe his success at the latest elections to the parent company of a consulting firm that recently became embroiled in a major personal data breach scandal.

WATCH Filipinos Return to Marawi for First Time Since Op to Drive Away Militants
The company was allegedly responsible for molding the former Davao City mayor ’s public image into that of a “tough crime fighter” which proved appealing to the voters, and won the presidency for Duterte.

"In the run up to national elections, the incumbent client was widely perceived as both kind and honorable, qualities his campaign team thought were potentially election-winning. But SCL’s research showed that many groups within the electorate were more likely to be swayed by qualities such as toughness and decisiveness. SCL used the cross-cutting issue of crime to rebrand the client as a strong, no-nonsense man of action, who would appeal to the true values of the voters," the SCL website content cited by the newspaper said.

"Even if you have just one staggering likeable trait, given the right combination of strategies, you could win an election against a very formidable opponent," Alexander Nix, former CEO of Cambridge Analytica, declared.

Philippine President Rodrigo Duterte has repeatedly made headlines around the world thanks to his uncompromising tactics and extravagant statements.

On March 18, Duterte has announced slamming the International Criminal Court which is currently investigating the deaths of nearly 4,000 Filipinos who have been killed by police during the ongoing crackdown on drugs in the country, stating that ICC has no jurisdiction over him, "not in a million years."

Earlier the same month, the president advised his military to refuse to cooperate with UN experts and suggested "throwing them to the crocodiles" if said experts actually arrive in the country.

Duterte also gained considerable media attention along with a wave of outrage among human rights organizations when he ordered his troops to shoot female rebels in the genitals to render them “useless”, as well as when he insisted that condoms "aren’t pleasurable" and that their use should be avoided.