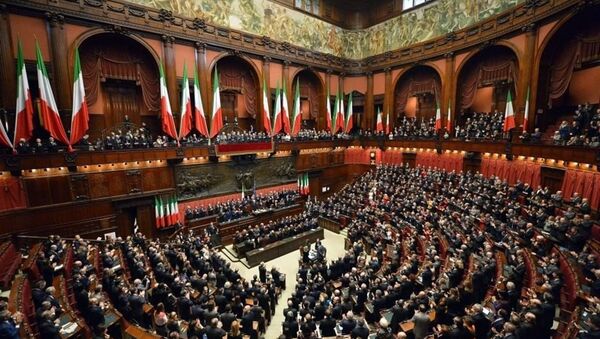 © Photo : Presidenza della Repubblica
Subscribe
The coalition of center-right and right-wing parties, who won the majority in the new Italian government, lambasted the decision of the outbound Cabinet to expel Russian diplomats amid political uncertainty

The anti-immigrant eurosceptic Lega Nord as well as the center-right Forza Italia and Brothers of Italy parties have condemned the decision of the outgoing government to follow the UK lead and get in a diplomatic row with Russia. According to them, the step can possibly entail grave consequences for the new ministers.

“The outgoing government should deal with the routine questions, while the expulsion of diplomats is a serious step. They act like they are a fully functioning government without any limits. But they are supported by the parties, which have only 20 percent representation in the newly elected Parliament, and they have no right to act like this,” an MP of Forza Italia, Lucio Malan, told Sputnik.

He was outraged that the government hadn’t consulted the parties, which gained the parliamentarian majority in the recent elections.

“They should have explained us that this is what the NATO demands. But they didn’t tell us about it, we learned it from the TV news. Nobody has consulted with us. This is unacceptable. Especially, when we speak about the strategy. They say that Russia is behind the assassination, which is alarming for us. But we need the information about the plausible facts . We should acquire the understanding of political consequences of this step,” he told Sputnik.

He also pointed out that Italy strives for good relations with Russia, saying that a sanction policy is fruitless, as it can harm the Italian economy without bringing the international community “not an inch closer” to resolving such problems as the Ukrainian conflict.

“When the EU discusses the sanctions against Moscow we should recognize their goal and the possible results,” Malan said.

The Lega Nord representative in the regional parliament of Veneto, Stefano Valdegamberi, named the solidarity with London over the Skripal case “a stupid decision.”

“We need to release Russia from sanctions and look for new ways of cooperation. This was a stupid decision to express solidarity with London, which gave no solid evidence, just suspicions without fact base. Italy followed the UK without confirmation of the accusations. I hope this is the last mistake the government has made. I would like to see the next Cabinet to change the course, to build as good relations with Russia as they once used to be. This is what the people of Italy demanded in the elections,” Valdegamberi told Sputnik.

A former member of the European Parliament, Giulietto Chiesa, predicted that we wouldn’t find out the truth about the Salisbury’s incident for a long time. In his article for Sputnik he compared the events in March 2018 with a story from September 1957, when the US and the UK wanted to destabilize the situation in the Middle East, precisely in Syria, according to the recently de-classified documents. He reproached Italy for following the UK’s lead.

“The Parliament doesn’t function, the government doesn’t exist in fact, as they resign, but the foreign minister still endorses the expulsion of Russian diplomats,” pointed out Chiesa.

With no party getting an absolute majority, concerns have been raised that Italian President Sergio Mattarella will struggle with appointing a new prime minister and forming a new cabinet.

Italy expelled two Russian diplomats following the UK call. More than 25 countries, including most EU member states, as well as the US, Canada and Australia, followed suit.

Russia has responded with symmetric measures, expelling the diplomats of the involved states.

On March 4, Skripal and his daughter Yulia were found unconscious on a bench at a shopping center in Salisbury, UK and are currently being treated for exposure to what the British government believes to be the A-234 nerve agent. The UK has claimed that the substance was developed in the Soviet Union and has accused Russia of orchestrating the attack. Russia has strongly rejected the accusations and offered assistance in the investigation. However, Moscow's requests for samples of the chemical substance used to poison Skripal have been denied.

Later the chief of the Defense Science and Technology Laboratory (DSTL) at Porton Down, Gary Aitkenhead, told SkyNews that the lab had identified the nerve agent used against Skripal as Novichok, but could not prove it was made in Russia or determine its country of origin.