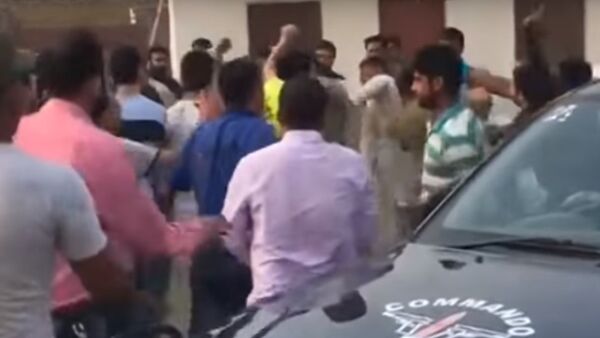 Chinese engineers engaged in the construction of the M4 highway from Bahawalpur to Faisalabad in Pakistan fiercely attacked policemen responsible for their security after they were prohibited from leaving the area alone.

A number of amateur video clips are currently circulating around the worldwide web, displaying Chinese nationals attacking Pakistani security officials. One of them shows a construction engineer climbing up on the bonnet of a police car, while others trash policemen and a number of locals.

According to police, the Chinese engineers and other officials wanted to leave their camp in Khanewal for a "red-light" area on Tuesday night without a security squad. Having, for security reasons, been denied the permission to leave the area unattended, they resorted to agitation and even violence.

For instance, they halted the power supply to the police camp set up at the main construction facility, as well stopped work on the project the following day and abandoned heavy machinery on a number of roads in the area.

Nevertheless, the protesters reported to the Pakistani authorities just the opposite: that they were in fact attacked by the police, with the latter preventing the staffers from conducting their work.

The Pakistani police denied the accusations outright, however.

This is not the first case of Chinese nationals lashing out at the local police. In 2016, a number of Chinese workers, also engaged in construction, expressed a wish to stay at the camp overnight. The police officials’ denial triggered a clash in which some Chinese engineers linked with the army and trained in martial arts inflicted injuries on police personnel.