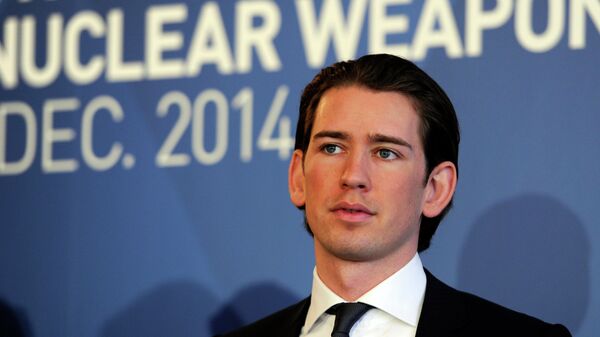 © AFP 2023 / SAMUEL KUBANI
Subscribe
International
India
Africa
The chancellor emphasized the neutral role of the country on the international scene, commenting on the reasons why Austria and the third of the EU states refused to take part in the expulsion parade, induced by the UK over allegations that Russia poisoned ex-spy Sergei Skripal.

“We have good relations with Russia now. We are a neutral country and home to the headquarters of many international organizations such as the UN and OSCE; hundreds of diplomats come here to have talks on neutral ground. That’s why we can develop the role of a bridge between nations,” said Kurz.

The theme was brought up during the interview for the broadcaster Plus 4, marking Kurz’s 100 days in office leading the country.
Austria limited its response to recalling  its ambassador from Russia for consultation, using the gesture to demonstrate solidarity with the UK and condemn Russia, according to Kurz. This put Austria in the group of 9 EU countries, which opted not to expel anyone.

Earlier the nation’s Foreign Minister Karin Kneissl said in a show on Austria’s ORF television that Vienna is prepared, if asked, to act as a broker between Russia and the West in the spat over the Salisbury attack. She stated it was important to keep channels for dialogue open.

"One is asked to mediate. But we are a go-to partner for all those involved," she said.

The decision came ahead of the Austrian chairmanship in the European Union and faced irritation in the EU and in Austria, even within Kurz’s own party, the center-right People's Party (ÖVP).

Blaming Moscow for the poisoning of the ex-spy, the UK expelled more than 20 Russian diplomats and called on other countries to undertake the same measure. More than 25 countries, including most EU members, several other European states, as well as the US, Canada and Australia have followed the example.

Russia has responded with the same measures, expelling the diplomats of the involved states.

On March 4, Skripal and his daughter Yulia were found unconscious on a bench at a shopping center in Salisbury, UK and are currently being treated for exposure to what British experts believe to be the A-234 nerve agent. The UK has claimed that the substance was developed in the Soviet Union and has accused Russia of orchestrating the attack.

Russia has strongly rejected the accusations and offered assistance in the investigation. However, Moscow's request for samples of the chemical substance used to poison Skripal was denied.

Later the chief of the Defense Science and Technology Laboratory (DSTL) at Porton Down, Gary Aitkenhead, told SkyNews that the lab had identified the nerve agent used against Skripal as Novichok, but could not prove it was made in Russia or determine its country of origin.

The Russian Embassy than stated that the latest turn proves that London’s earlier claims regarding Russia’s alleged involvement in Skripal’s poisoning were a “bluff.” Moreover, the Embassy also noted that Aitkenhead did not deny that the Porton Down lab could in fact possess the poisonous agent known as Novichok.