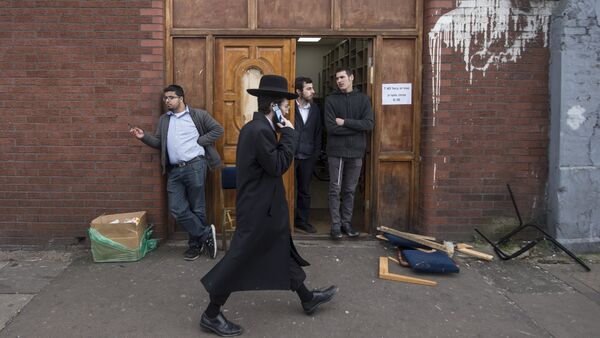 Britain needs to get rid of Jeremy Corbyn, was the message from business mogul, Lord Alan Sugar. His comments come after the Labour leader decided to attend a Seder by a group that once called for Israel's destruction. Sputnik spoke to the political activist and former journalist, Tom Stokes about it.

Tom Stokes: The establishment does not like Corbyn, there is no doubt about that, the extremely wealthy don't like Corbyn because Corbyn has plans for increasing taxation on the top 5 percent, but ideologically they've been very opposed to his line, his consistent line since he entered politics and before, a man like he says for the many not the few, who is opposed to war consistently, who is a strong advocate of human rights, they just don't want him, they just do not want to have him about the place and this anti-Semitism row, it's a stoked up row because the Labour party in actual fact has fewer anti-Semitics than for instance the Tory party, but there is not a word about that, I would discount Alan Sugar, he's a big player, he has notoriety and he's a bit of a celebrity and so on, but I'd take far more seriously the threats from the British military, for instance, or from elements of the British military in what purports to be a democracy, the threats of resorting to a coup to remove the democratically elected politician who is potentially a prime minister.

READ MORE: 'Sorry' Seems to Be the Hardest Word for Corbyn in Anti-Semitic Row

Sputnik: This recent row seems to be another attempt to oust Corbyn from the Labour party at a very chaotic time in British politics regarding everything going on with Skripal and Brexit looming on the horizon, so while sounding too conspiratorial and taking into account the eagerness by sectors of the British media, sectors of the Labor party and other groups, is this just another desperate effort to remove Corbyn as Labour leader?

Tom Stokes: I think it is, and it's sustained, there has never been a month since Corbyn assumed the leadership of the Labour Party when he hasn't been under attack. Anti-Semitism is present throughout society at a certain level because we're all human, we're flawed, we're misinformed, a certain cohort of the population will seize on to conspiracy theories and all of that, but it's certainly not prevalent in the Labour Party, it exists, but it's not prevalent, and certainly anyone who has studied Corbyn's past, his consistent past, will know that he doesn't harbor any anti-Jewish sentiment, at least it has never been discerned.

Sputnik: With all of this going on and signs of this row, similar row or similar smears, however you want to describe it, could essentially reoccur in the future, how would you advise the British Labour party and Jeremy Corbyn to actually protect themselves and safeguard themselves going forward against these smears from an out of control media?

Tom Stokes: I think that they've taken the right course of action, in the absence of any other option in terms of the mainstream media is not open to Labour to get its ideas across in a fair way, so the Labour Party has opted to use social media as a way of getting its story out and it has to, as a political party is has to get its side of the arguments out and its ideas out there, so my advice would be to investigate the idea of putting up on the web a proper newspaper, an online newspaper, but in the absence of that, social media is the what they have to use and they do it effectively.