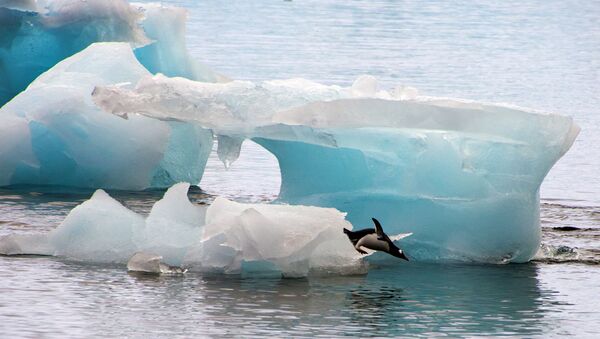 © AFP 2021 / VANDERLEI ALMEIDA
Subscribe
Ice in the Antarctic region is melting at a much faster pace than was previously believed, according to a new study by scientists at the University of Leeds published in the journal Nature Geoscience.

The team examined the density of ice underneath the sea surface using data from satellites. They found that the ice near the ocean floor has shrunken dramatically over the past five years.

Radio Sputnik discussed the findings of the study with its lead author and research fellow at the School of Earth and Environment at the University of Leeds, Dr. Hannes Konrad.

People study this area because it holds the potential to raise global sea levels quite significantly in the future. We've basically looked at how the boundary of this ice sheet, where it meets the ocean, is retreating or has been retreating over recent years and found that in part it's actually quite a very strong signal and our study has basically been like first assessment all around Antarctica, just proved that this is a very widespread phenomenon specifically in the western Antarctic.

Sputnik: What could be the consequence of ice melting in the Antarctic region over time? Is it a matter of serious concern for the likes of yourself and the global audience then?

Dr. Hannes Konrad: The main consequence of ice melting in Antarctica is human life and that, of course, is a matter of concern. At the moment the polar ice sheet in Antarctica and Greenland are not the main drivers of sea level rise globally, but they are expected to outplay other contributors, the sea level rise, expansion of the ocean due to warming in the next century, so actually the melting of Antarctica is a concern for future generations, I think yes.

Sputnik: Now we know that global warming is one of the consequences with regard to melting of ice in the Arctic. Are there any geographical processes that are actually affecting the melting of the ice that we should be aware of? Perhaps you could just explain to our listeners what methods do you use to examine the changes that are going on currently in the southernmost region of the earth.

Dr. Hannes Konrad: Our specific study was done with the European Space Agency, using two satellites which measure basically ice sheet or glacier elevation and we were able to somehow take this measurement of height change into a change of the boundary of the Antarctic ice sheet with the ocean. There are certainly other techniques.

What we did cannot inform us about the present ice sheet, present contribution of Antarctica to sea level rise because we're all living at its boundary, of this small bound around Antarctica. But same satellite measurements and lots of others that can be used to assess how much ice Antarctica has been leaving at the moment and this is also done by the larger community that works on earth observation in polar regions.

Sputnik: What long-term impact could the ice melting have on our planet and what risks could it pose?

Dr. Hannes Konrad: The main risk is still, or the most straightforward one I can think of is sea level rise, and that will affect any kind of life on Earth. It also has different effects, like you would put more fresh water into the world's oceans if the ice melts and that also affects life in the oceans and also ocean circulation so it has certain feedbacks on climate. So I think there is quite a variety of effects you could see basically all over the planet, not just locally

Sputnik: What could be proposed to stabilize now the Antarctic ice masses and is it even possible?

Dr. Hannes Konrad: I think, more or less, the problem is usually considered just an observational one, so we look, we see what's happening and we try to predict what's going to happen in the future. But just recently people started to think about certain geoengineering measures that could be taken to prevent such a catastrophic collapse that is ought to happen over the next century in the Antarctic.

What could be done would try to prevent this warm ocean water from reaching the ice shelf, which basically means in this hostile environment, like build certain structures on the sea floor that would somehow prevent warm water from reaching the ocean. I think it's absolutely not clear that this would help and is also be in West Antarctica which is retreating are thought to be or could be in a state where they cannot be stabilized simply by holding up this warm ocean water. So actually a tricky question and I think one that we don't know enough about yet to make a decision on: is it worth.

The views and opinions expressed by Dr. Hannes Konrad are those of the expert and do not necessarily reflect those of Sputnik.