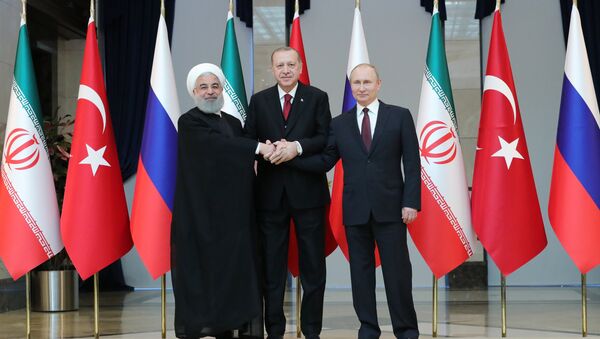 © Sputnik / Michael Klimentyev
/
Go to the mediabank
Subscribe
International
India
Africa
MOSCOW (Sputnik) - The presidents of Russia, Turkey and Iran – Vladimir Putin, Recep Tayyip Erdogan and Hassan Rouhani – have expressed their opposition to separatism in Syria and any attempts to change the situation "on the ground" under the pretext of fighting terrorism, said a joint statement adopted Wednesday.

"They [the presidents] rejected all attempts to create new realities on the ground under the pretext of combating terrorism and expressed their determination to stand against separatist agendas aimed at undermining the sovereignty and territorial integrity of Syria as well as the national security of neighbouring countries," the statement, released on the website of the Iranian presidential administration, reads.

The presidents stressed the importance of separating terrorist groups in Syria from armed opposition groups who adhere to the peace agreement.

"In the fight against terrorism, separating the above-mentioned terrorist groups from the armed opposition groups that had joined and would join the ceasefire regime bore utmost importance with respect to preventing civilian casualties," the statement said.

The leaders also welcomed the convening of the first meeting of the Working Group on the release of detainees and abductees "and handover of the bodies as well as the identification of missing persons in Astana on 15 March 2018 with the participation of three guarantors as well as the UN and ICRC, and emphasised the importance of the effective functioning of the Working Group which would help build confidence between the conflicting parties."

"The presidents … called upon the international community, particularly the UN and its humanitarian agencies, to increase its assistance to Syria by sending additional humanitarian aid, facilitating humanitarian mine action, restoring basic infrastructure assets, including social and economic facilities, and preserving historical heritage," the statement reads.

The three presidents held a joint press conference in Ankara:

Erdogan called for preserving the territorial integrity of Syria. He reiterated that the aim of the Ankara-led Olive Branch operation in Northern Syria was to fight Kurdish militia posing a threat to Turkey. The president said Turkish forces would not stop their actions until they brought security and stability to the regions under the control of the militia, Manbij in particular. Erdogan said the EU had promised to allocate some 3 billion euros for the restoration of Northern Syria but had not done it.

Rouhani accused the United States of trying to benefit from the use of terrorists:

"Unfortunately, some major powers, including the United States, wanted to use terrorist groups such as Daesh and Nusra Front as a tool in this region," Rouhani said.

He underscored that the Syrian conflict has no military resolution, urging to respect the war-hit state. He added the three guarantor countries agreed to assist the Syrian people in the restoration of peaceful life and said that any attempts to disintegrate Syria would be thwarted.

Putin said the sides agreed to broaden the peacemaking efforts, including the Astana talks. He stressed it was unacceptable to politicize humanitarian aid for Syria and that the three states were the only ones actually providing it. Putin announced that the final goal in Syria was to put an end to terrorism. The presidents paid specific attention to the post-conflict restoration of Syria, the Russian president said. Putin welcomed Erdogan's initiative to galvanize joint humanitarian efforts in Syria.

Speaking about the Skripal poisoning case, for which the UK groundlessly blames Russia, Putin called for sticking to international law and expressed hope that common sense would prevail, adding that Moscow was not expecting apologies from London.