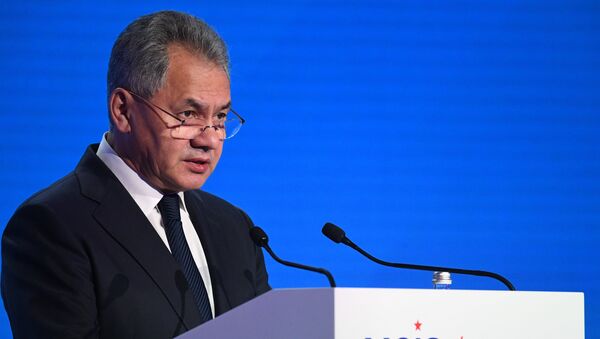 MOSCOW (Sputnik) — A new arms race is triggered by claims of some countries to have some privileges compared to other states, Sergei Shoigu said on Wednesday.

"The claims of individual countries for exceptionalism are prompting a new arms race," Shoigu said at the Moscow Conference on International Security.

“Elements of the global missile defense system are being deployed, including outside the territory of the United States, on the European continent and in Asia. Today, no one has any doubts that the US missile defense system is a serious destabilizing factor, an incentive for the arms race, a flagrant violation of international obligations, including treaties on the elimination of intermediate-range and shorter-range missiles,” Shoigu added.

Seventeen drones of terrorists, which could not be created without the help of developed countries and which could operate at the distance of up to 100 kilometers (62 miles), have been destroyed in Syria over the past three months, Shoigu said.

"Their creation is impossible without technical assistance of developed countries. In the course of the past three months, we have destroyed 17 such devices," Shoigu said at the Moscow Conference on International Security.

"It is obvious that if we combined our efforts with the coalition, the history of Daesh* in the region could be completed much earlier and with smaller losses," Shoigu stressed.

More and more countries are getting involved in the crisis on the Korean peninsula, the escalation of the situation can lead to incidents affecting the entire region, Sergei Shoigu said.

“First of all, there is a crisis around the Korean peninsula, more and more regional powers are getting engaged into it. I believe that there is no military solution to the Korean problem. Pressure and threats are not an effective means for resolving the crisis. Moreover, the constant escalation of the situation and the demonstration of military might can lead to incidents and even armed conflicts,” Shoigu stated.

There are 4,500 militants of the Daesh terrorist group in Afghanistan, their number is increasing, Russian Defense Minister Sergei Shoigu said.

Daesh Troops Redeployed to Afghanistan, Pakistan – CIS Anti-Terrorism Center
“Afghanistan can become not only a safe haven for the Daesh militants, but also for other terrorist organizations, from there they will move throughout the Eurasian continent. There are about 4,500 Daesh militants in Afghanistan at the moment, and their number is constantly growing,” Shoigu said.

The North Atlantic alliance is not ready for a respectful conversation with Russia, Russian Defense Minister Sergei Shoigu said.

"The Russian Defense Ministry has repeatedly suggested that NATO begin a dialogue. However, in Brussels, they are not ready for a respectful conversation. In turn, we are not going to knock on the closed door. But we do not intend to ignore the attempts of forceful pressure on us," Shoigu said.

"A 10,000-strong contingent, which has all types of offensive weapons, has already been deployed to the Baltic States and Poland. The activity of the US and other NATO fleets in the Black and Baltic seas is intensifying, the number of exercises and drills of the North Atlantic Alliance has grown, while they are clearly anti-Russian," Shoigu added.

Fighter jets of the Russian Aerospace Forces have lifted off more than 25 times since the beginning of 2018 to intercept NATO aircraft near Russia’s borders, Sergei Shoigu said.

The seventh Moscow Conference on International Security kicked off on Wednesday in the Russian capital. The MCIS is an annual forum bringing together representatives of defense departments, international organizations and non-government experts looking for answers to key issues of the international security.