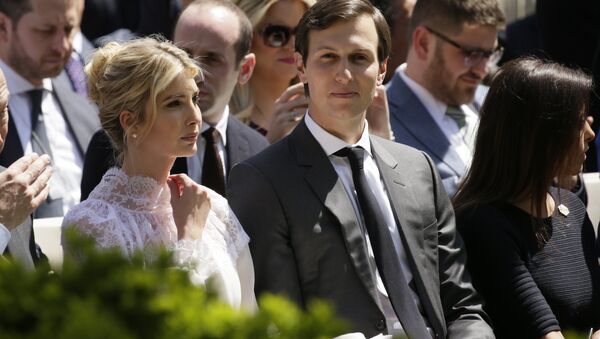 © REUTERS / Kevin Lamarque
Subscribe
President of Planned Parenthood Cecile Richards claims she felt like Ivanka Trump and Jared Kushner offered her a bribe at a meeting in January of last year to stop the organization from providing abortions to US women.

Richards, who plans to step down as CEO of the nonprofit organization later this year, has detailed her meeting with the daughter and son-in-law of US President Donald Trump in her book, "Make Trouble: Standing Up, Speaking Out and Finding the Courage to Lead," which was released Tuesday.

In the book, Richards reveals that, in an apparent bid to deliver a "political win," the pair suggested during a meeting shortly after Donald Trump's inauguration that federal funding for Planned Parenthood could increase if the organization agreed to cease abortion services.

Twitter on Fire Over Engine Failure of Ivanka Trump's Chopper
The CEO said she was appalled by the "surreal" offer to "barter away women's rights for more money" and explained to the First Daughter that this was not an option.

When the meeting was first reported, a spokesperson for Planned Parenthood told CNN that from the organization's perspective, the purpose of the meeting was to make sure Ivanka fully understood the organization's role in providing health care to millions of people and why they shouldn't be prevented from accessing care at Planned Parenthood locations.

Richards writes in her book that after her meeting with Ivanka and Kushner, she told a colleague that the deal "felt almost like a bribe."