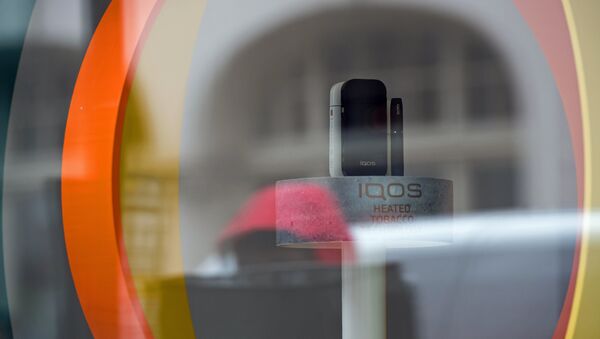 Big Tobacco companies like Philip Morris are investing billions in a new type of cigarette which heats tobacco, rather than burns it, and is thought to be much safer. Sputnik spoke to Professor Marewa Glover, who said some public health organizations were taking a very strange attitude to these new products.

Tobacco companies, alarmed at the fall in traditional cigarette smoking and the rise of vaping, have come up with a new idea of retaining market share.

Heat-not-burn cigarettes, sometimes known as IQOS, heat the tobacco to around 350 degrees Celsius — much lower than the 600 degrees in traditional cigarettes — which releases a "flavorful nicotine-containing vapor' without burning the tobacco.

"The lower temperature heating releases the true taste of heated tobacco. Because the tobacco is heated and not burned, the levels of harmful chemicals are significantly reduced compared to cigarette smoke," says Philip Morris on its website.

"The most shocking behaviour is not what tobacco companies are doing, but what so-called health organizations are doing when they try to dissuade people from switching from smoking to harm-reduced products," said Professor Marewa Glover from the College of Health at Massey University in New Zealand.

Philip Morris International (@InsidePMI) is marketing its iQOS heated tobacco product worldwide in ways that appeal to kids, including outdoor ads and large parties. @FDATobacco should investigate as it decides whether to allow iQOS sales in U.S. https://t.co/okrwdlsAjl pic.twitter.com/ZjQXKFKaeG

"They are lying to government officials to manipulate them into passing laws banning or unnecessarily restricting these new products. They are getting governments to impose taxes, fines and even prison sentences to stop people from accessing and using less harmful alternatives. It's insane," Professor Glover told Sputnik.

Philip Morris International — which has invested US$4.5 billion in IQOS — announced last month its Papastratos factory in Greece would become the second facility to cease production of traditional cigarettes and switch over to producing IQOS tobacco sticks.

The company's most famous international brand is Marlboro but they also trade under the name Apollo-Soyuz and Optima in Russia, Sampoerna in Indonesia, Morven Gold in Pakistan and Assos in Greece.

Some countries, like New Zealand, have taken a dim view of the new IQOS cigarettes despite evidence suggesting they are far less likely to cause cancer.

Court Case in New Zealand Backfired on Ministry of Health

"The most important message from the Ministry of Health v Philip Morris case is that the judge saw that banning a product that gives smokers a very low risk alternative was contrary to NZ's Smoke-Free Environments Act (1990) which was intended to reduce harm from smoking tobacco," Professor Glover told Sputnik.

"This means that any acts, such as banning vaping, and deliberately misleading people about or haranguing them for vaping, or using IQOS could be seen to be contrary to the SFEA," she told Sputnik.

Ministry of Health and ministry of Finance in Colombia: iqos should pay taxes and be subject to current cigarette regulation @countthedead @andresvecino @Tobacconomics https://t.co/yrwXc8oWOd

"Tobacco companies are interested now in developing harm reduced alternatives to smoked tobacco because they were losing millions of customers to the independent vaping start-ups. Vapers were helping others switch resulting in no less than a mass exodus of customers," Professor Glover told Sputnik.

IQOS Cigarettes On Sale In The UK

Philip Morris is banned from advertising tobacco products in the UK but IQOS cigarettes are on sale in a handful of shops in London and the company is hoping their popularity will spread by word-of-mouth recommendations.

Professor Alan Boobis, from Imperial College in London, chairs the UK's Committee on Toxicity, which published a report in December about heat-not-burn cigarettes.

The report, commissioned by Public Health England, found heated tobacco products reduced the release of toxic chemicals by between 50 and 90 percent.

"Our overall conclusions were that it's likely that based on the information we had on toxic constituents that heat-not-burn were potentially less harmful in smokers. If a smoker were to switch to IQOS they would experience less harm but not 'no harm'," Professor Boobis told Sputnik.

He said Philip Morris's rival, British American Tobacco (BAT) had developed its own hybrid device, called an iFuse, but he said they seemed to be just "testing the waters" in the UK, whereas Philip Morris were investing heavily in IQOS.

This seems very odd. Roast dinner? Chicken nuggets? Bacon? What do our vaping friends make of this? https://t.co/daGWvZNdGP Looks like a load of complete crap to try and justify a "news story" to us.

Professor Boobis said while it was preferable for existing smokers to switch to IQOS — or vaping — it was essential that heat-not-burn cigarettes were not marketed to under-age people.

"Within the population there is a hardcore of 15 to 18 percent who continue to take up smoking despite all the evidence of harm. Within any generation a certain percentage take up smoking. If you take a naïve young person and they choose to take up IQOS and not traditional cigarettes that is potentially less harmful," Professor Boobis told Sputnik.

"Traditional cigarettes create a vicious cycle in the lung with all sorts of toxic chemicals. These heat-not-burn cigarettes reach lower temperatures and doesn't promote such aggressive destruction of these nasties," Professor Boobis told Sputnik.

He said more behavioral science research was needed to discover what drives individuals to take up any type of smoking.

The views are those of the speakers and do not necessarily reflect those of Sputnik.