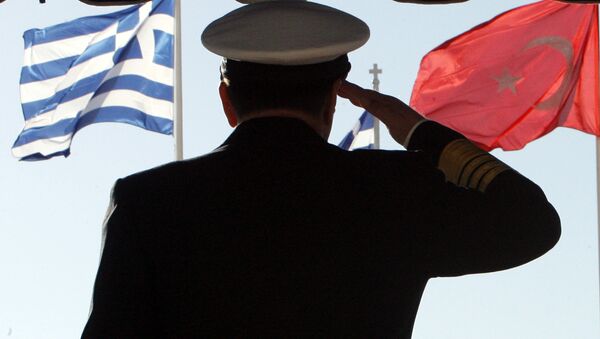 The Greek prime minister has earlier urged Ankara to cease its illegal activities in the Aegean Sea and respect the “sovereign rights of Greece and Cyprus” and not to threaten “the stability and a normal situation” on the anniversary of Greek independence from Ottoman Empire.

Greek PM Alexis Tsipras has accused Turkey of intensifying provocations, negatively affecting relations between the two countries and has also called on Ankara to abandon its "dead end tactics." He went on to urge Turkey to release two Greek soldiers apprehended for crossing its border last month, saying their return would be a gesture of goodwill.

"Turkey has recently become more provocative and is exacerbating the situation on every front […] We call on our neighbors to desist with this escalation because it is pointless," Tsipras said.

Tsipras slammed Turkey's "illegal activities" in the Aegean Sea and called on it to respect the sovereignty of Greece and Cyprus and to adhere to the rules of international law, during his speech on the anniversary of Greece's independence, which was celebrated on March 25. He also noted that Greece possesses a powerful military that it uses not to threaten, but to guarantee peace and stability in the region.

The two Greek soldiers crossed the Greek-Turkish border, allegedly following the trail of illegal immigrants. They were detained by Turkey on suspicion of illegal entry and attempted military espionage on March 1, 2018.

Earlier, the Turkish navy intercepted two Greek ships, one of which was carrying Greek Minister of Defense Panos Kammenos on board on their way to the disputed island of Imia (Kardak) on March 28. The dispute over the island between Greece and Turkey ignited in 1996 and led to a crisis in the two countries' relations. The conflict was defused after the intervention of the international community.