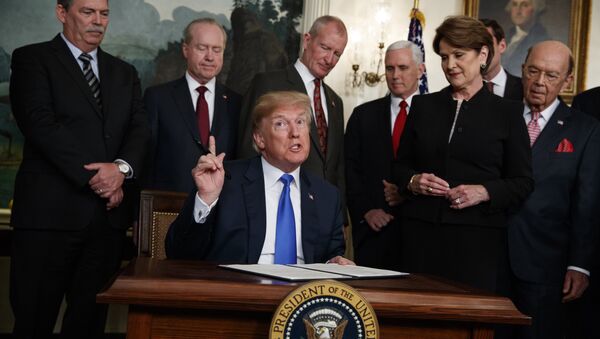 © AP Photo / Evan Vucci
Subscribe
International
India
Africa
Neither Washington nor Beijing is interested in pushing ahead with the tariff war as it will severely hit consumers in the US and China, analysts told Sputnik. However, some of them believe that the ongoing confrontation may translate into a more fierce "quotas war" if the sides fail to reach a compromise.

US President Donald Trump does not want to start a real tariff war with China since he understands that it would hit American consumers, Mei Xinyong, an analyst at the Chinese Academy of International Trade and Economic Cooperation (CAITEC) under the Ministry of Commerce (MOFCOM) of China, told Sputnik, adding that Trump risks going too far.

"[Trump] just blackmails [Beijing] trying to get a better deal and access to the Chinese market," Mei opined in an interview with Sputnik China. "However, the question is, whether or not he will fall wide of the mark."

After Trump signed an executive memorandum on March 22 envisioning the imposition of new tariffs on up to $60 billion in Chinese imports over Beijing's alleged unfair trade practices, the People's Republic of China's (PRC) Ministry of Commerce imposed tariffs on $3 billion worth of US imports targeting 128 American goods on April 1. The retaliatory measure came into force on April 2.

Asia
Beijing Answers the US Trade War, Charges US Pork and Aluminum Scrap
Earlier, Washington had announced additional tariffs on steel and aluminum imports with exemptions for Canada and Mexico.

Commenting on the newly introduced retaliatory measure the Chinese Ministry of Commerce called upon the US to abolish its protectionist measures stressing that they "abuse the security exception clause of World Trade Organization (WTO) rules and go against the principle of non-discrimination in multilateral trade," Xinhua reported.

It is expected that on April 6 the Trump administration will present a list of imported Chinese goods, that will face tariffs for Beijing's "unfair competition" in the field of technology transfer and intellectual property. For its part, China has been dropping hints about the potential introduction of customs duties on American soybeans, airplanes and industrial equipment.

Only Compromise May Stop a Tariff War

"I believe that negotiations, compromise can stop the trade or tariff war. However, reaching a compromise involves concessions. And there is a famous Mao Zedong [the former chairman of the Communist Party of China] thought about concessions, according to which one should achieve unity through struggle," Mei said referring to Mao's formula "unity, criticism, unity."

The Chinese analyst explained that it means that if one side is making concessions the other side may try to take advantage of this by stepping up its demands.

"Although China adheres to a peaceful solution, however, if it does not demonstrate that it is capable of delivering a heavy blow to its rival and causing severe damage, then the adversary will not stop striking China," Mei presumed.

Viral
Trump Trade War Sees China Deploy Falling Tiangong-1 to Mar-a-Lago
According to Mikhail Belyaev, an analyst with the Institute of Stock Market and Management, the ongoing tariff row between Washington and Beijing may soon translate into a "quotas war." The Russian analyst believes that additionally the sides may introduce "more cunning and veiled restrictions," which sometimes work even better than direct quotas.

"The imposition of direct quotas is a tough confrontational step that is noticeable to everyone and is clear to all," Belyaev stressed. "At the same time, the introduction of technical requirements for imports as a rule, go unnoticed by the general public, but they work even more effectively, more rigidly."

Belyaev noted that while it is quite difficult to justify the imposition of new quotas it is easier to toughen technical requirements for imports citing environmental issues or technological standards.

The Russian analyst believes that that China's hi-tech products are likely to fall under Washington's quotas in the first place. According to him, the US is interested in creating barriers for China in this sphere for two reasons: First, it's Washington's direct rivalry with China; second, Americans are seeking to prevent the Chinese from making progress in digital economy on the global arena.

China, US Seeking to Reach Compromise and Save Face

However, Lee Wang Hwi, a professor at the Department of Political Science and Diplomacy of Ajou University, South Korea, argues that the US and China are likely to reach a compromise as both are unwilling to extend a trade war due to internal political reasons.

"Trump openly and in detail voiced his conditions: the reduction of China's customs duties on cars and the diversification of supplies of semiconductors from South Korea and Japan to the United States, an additionally, the access to [China's] financial sector. The space for negotiations is clearly marked," Lee highlighted.

‘An Exactly Proportionate Response’: China’s Measured Retaliation to US Tariffs
On the other hand, China's Vice-Premier Han Zheng called upon the sides to show restraint in the trade conflict, while delivering a speech at the China Development Forum in Beijing on March 25, the academic remarked.

"In addition, China has not yet begun to consider raising customs duties on soybeans, sorghum and Boeing aircraft, which would inflict the strongest political damage on President Trump. This may be interpreted as an indirect confirmation of China's readiness for negotiations," Lee emphasized.

In the second week of April, a China-Japan-South Korea summit is due to take place in Tokyo on the issue of creating a trilateral free trade zone. It is expected that during the meeting Beijing will raise the question of the ongoing China-American trade confrontation.