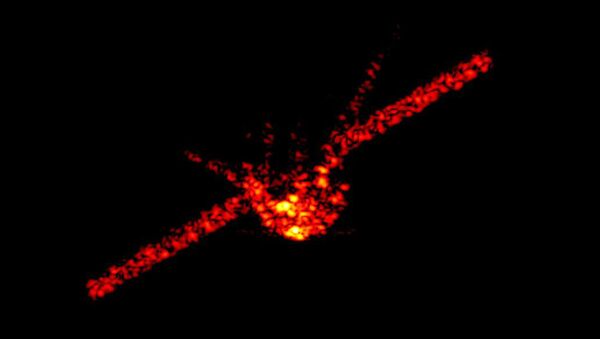 A Chinese space station known as Tiangong-1 re-entered the atmosphere at about 15 minutes past midnight on April 2nd, burning up over a large area of the South Pacific.

Sputnik: Tell us about the descent of the Tiangong-1, did it go as expected and as predicted and did it at any time pose any danger to anyone?

Brad Tucker: We've known for a while that it was in a slightly uncontrolled descent, which meant that we weren't able to pinpoint the time of the re-entry and therefore the location of re-entry, which meant there was a large area of the Earth that could have had this re-enter; but even if it was going to pass over someone, there was next to zero chance of being hit by anything or anything falling near you. Unlike a meteor, where a meter comes into the Earth and it is travelling very fast and it leaves an impact crater space debris, space junk doesn't do that; so the risk to humans was next to zero and ultimately it did land eventually where it should've and it was the Southern Pacific ocean, where most other space debris and large space junk lands, like the Mir, the Russian Space Station, which did a controlled re-entering in 2001, landing off the coast of Fiji.

Sputnik: How long are space stations like this are made to last for?

Brad Tucker: Skylab, the US's first space station was 9 years old, the Mir was over 15 or 20 years old, so it's quite long. There's a couple of factors: one is just how it was designed. Tiangong-1 was always a prototype designed to work on docking, maneuverability and some experiments working towards a more large, permanent space station, Tiangong-3. There are a few things, like how much fuel it has, how well it's built and ultimately when the country decides to de-orbit it, so at some point every satellite or object is decided to de-orbit and to be removed. The biggest problem that's posed is not just the space stations but satellites, satellites that get past their used by time because of technology and fuel and therefore just left floating around, there something like 1,3000 satellites that are currently defunct orbiting the Earth by a multitude of countries.

Sputnik: That's scary or is not scary, is that ok?

Brad Tucker: No it is scary, this is the great thing with the Tiangong-1, that it is highlighting the space debris problem. In fact, we saw the first crash between a defunct satellite and a working satellite in 2009 and the problem is it just creates more pieces of debris that float around and crash into more things and with every rocket launch, most of those boosters that put the satellite into orbit also leave pieces of debris. Now most of those do enter the Earth at some point and we never hear about it because it just harmlessly happens over the South Pacific Ocean, but the more you put into space, and, in fact, this year we should see somewhere between 100 and 120 rocket launches putting anywhere between 300 to 500 satellites in orbit, that will eventually produce a lot more things. This highlights the problem that we need to think about all of the stuff that we put up in space and make it part of a plan of do we get rid of it and how do we stop creating more space junk.

Sputnik: Why so much news and hype surrounding of the Tiangong-1, is this really an unprecedented situation, what makes it different than previous situations where we had debris falling?

Brad Tucker: I think there's a little bit of hype, a great example is 1979 the US space station Skylab had no plan for re-entry, no-one knew where it was going to happen and eventually crashed over Western Australia here. I think there are a few factors, it's a big object, it was clearly known to be uncontrolled for a few years, people saw it tumbling which meant the predictions of how it's going to land were even harder to do, we live in an era of social media where people can post information quickly, but also see videos, see information quickly, so there was a bit of anticipation that if it happened near someone, I would've loved to see it, because it would look like a great firework show, there's a bit of anticipation of wanting to see that. There was a mixture of pitch over the hype, but there was never really a need to worry for an average person, it was never going to affect their lives other than they might see something strange.

Brad Tucker: There's a lot of groups all around the world looking on how to solve this, groups like SpaceX, Elon Musk's private company which is launching rockets and making them reusable, which means that these rocket boosters come back down and land successfully on the Earth and are not another piece of space junk. One other thing that is now being led is that satellites are miniaturized.

Most satellites can be the size of a loaf of bread; they can fit in your hand. What that means is that at the end of their lifetime, their lifespan, they can simply be de-orbited into the Earth and burn up harmlessly. So there's a bit of environmental space impact, so to speak. Here in Australia at Mt. Stromlo we have a laser that's trying to remove this debris, so multiple groups around the world are looking at different aspects and luckily everyone is working together because space affects the entire Earth, it's not a political issue, no border is defined by space, it affects all of us.

The views and opinions expressed by Brad Tucker are those of the expert and do not necessarily reflect those of Sputnik.