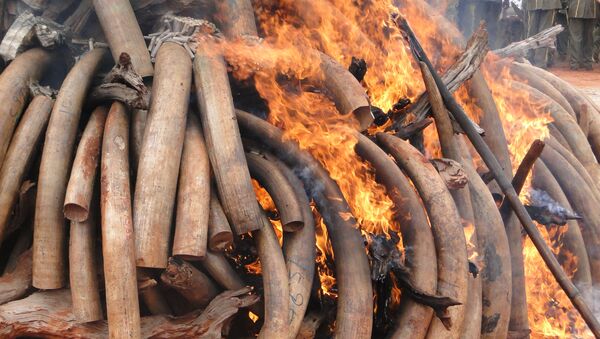 © Photo : Born Free Foundation
Subscribe
International
India
Africa
Michael Gove has sought to carve out a reputation for driving a range of environmentally progressive policies ranging from animal conservation to reducing plastic pollution in the oceans.

Britain's Agricultural and Environment Secretary Michael Gove has announced that the United Kingdom is to introduce the world's toughest bans on the sale of ivory, as the illicit trade has brought some of the world's most endangered wildlife to the brink of extinction.

In a statement to UK media accompanying the announcement, the Environment Secretary said, "Ivory should never be seen as a commodity for financial gain or a status symbol, so we will introduce one of the world's toughest bans on ivory sales to protect elephants for future generations. The ban on ivory sales we will bring into law will re-affirm the UK's global leadership on this critical issue, demonstrating our belief that the abhorrent ivory trade should become a thing of the past."

Today, Environment Minister @michaelgove published our response to a consultation on a UK #IvoryBan. In line with overwhelming public support, we can confirm that proposals will be brought forward to help #endwildlifecrime. https://t.co/rSkax7uYX1 pic.twitter.com/PfxoDFjXW8

Asia
Chinese Customs Strengthen Overseas Ties Against Illegal Ivory Trade
The policy change was formulated in consultation with at least 70,000 contributors, of which 88 percent responded in support of a total ivory ban.

The ban comes on the heels of the death of Africa's last male Northern White Rhino, ending attempts to revive the species in the wild through natural procreation. Around 20,000 African Elephants continue to be poached every year for their ivory, with around 111,000 having been killed in the last ten years, the worst loss rate for a quarter of a century.

The environmental cause is the latest that Michel Gove has sought to attach his name to in the course of holding the Environment Secretary's role, having also announced a ban on diesel fuel cars in Britain by the year 2040 and the phasing out of single use plastic straws to reduce oceanic pollution.