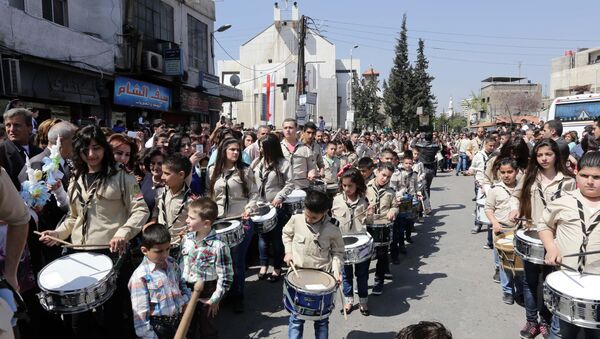 Thanks to Eastern Ghouta's liberation from terrorists, Damascus' Christian regions are no longer under fire and they were safe to go out and attend church.

On Sunday Syrian Catholics celebrated the Easter holiday, marking the resurrection of Jesus. The service was also held at the Damascus Patriarchal Cathedral of the Dormition of Our Lady (the so-called Az-Zeytun church).

"It's the first time in years that I cry with happiness. We pray and feel safe. We're not afraid for our children anymore," Sirin Dahi, who's come to Az-Zeytun church to celebrate Easter, told Sputnik.

"Today's holiday is highlighted by the joy of the Syrian Army's victory in Eastern Ghouta. We're happy that we're safe to celebrate Easter," Lin Istanum, a young Syrian, said.

"Fifteen days ago the Bab Touma neighborhood (the city's Christian district) was absolutely empty. People went out only in case of an emergency. Everybody was afraid of the rocket fire that has caused numerous civilian deaths. On Holy Week we remember those who lost their lives on the streets. Today we've walked down the streets where they died and commemorated the Passion of Christ and these people," John Badur told Sputnik.

Christians Celebrate Easter Around the World
Um Ilyas's grandson died during a rocket attack in the Bab Touma neighborhood. "We decorated our houses for Easter, we're laughing and we're conveying joy to future generations," she said.

On this very day Orthodox Christians celebrated Palm Sunday. "Today's Palm Sunday holiday is highlighted by the liberation of Eastern Ghouta. That's why this holiday is very strongly felt," Laure, a Syrian from the Mariamite Cathedral of Damascus, told Sputnik.

"The fact that we were able to perform traditional rituals and processions1 on the city's streets indicates the revival of a fraternal Syria where different nations and confessions live in peace. Today we lit candles in palm branches that symbolize our friendly relations which Syrians have been known for since ancient times," young Usef Rizq told Sputnik.

Johny Shadiak, a Syrian scout, told Sputnik that as a result of the Syrian Army's victory the scouts were able to easily march along Damascus streets. "Our country doesn't deserve fear. Thanks to the military heroes, this year the scouts from all the churches were able to go out and that had been impossible for the past few years."