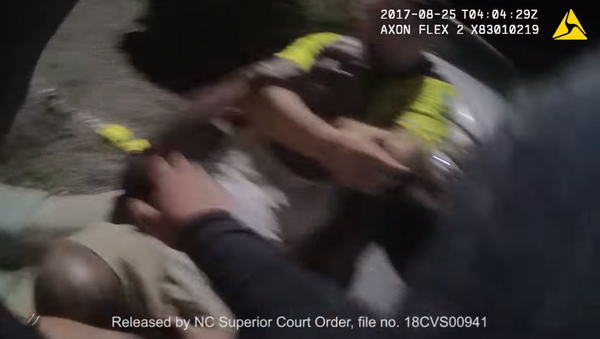 The recordings from the Asheville Police Department span over 30 minutes and comprise footage from six different officers who arrived on the scene while Rush was being tased and show the moments after he'd been handcuffed and placed inside a police vehicle.

​"These recordings depict an event which occurred August 24 and 25, 2017," the statement released by officials noted. "What happened in these recordings is unacceptable and does not meet the standards of the Asheville Police Department, the values of the City of Asheville or the expectations of Asheville residents."

"At a hearing held March 26, 2018, the Buncombe County Superior Court granted the City of Asheville's request that it be allowed to release all footage pursuant to NC Superior Court Order, file no. 18CVS00941, captured that night in the interest of public accountability and transparency," the statement added.

North Carolina's state laws prohibit the release of police recordings to the public unless those submitting the request, in this case the City of Asheville, have been given a court order to do so.

​Delgado's recording of the incident shows Hickman putting Rush in a chokehold as both Delgado and Verino Ruggiero, Hickman's then officer-in-training, attempt to put Rush's arms toward on his back in order to handcuff him.

"Quit kicking me, stop kicking me," Delgado tells Rush, just seconds before his body goes limp. Hickman is later heard yelling at Rush and telling him to not "look at me with your stupid, spitty, blood face."

​In video recorded by Sergeant Lisa Taube's body camera, Hickman admits to his supervisor that he'd hit Rush in the face repeatedly with the butt of his taser.

"I hit him in the face as if it was a club like three times. That was effective," Hickman told Taube when she asked whether the taser was effective in subduing Rush. "That's what happened to his left side, I punched him in the face with it about as hard as I could. That's why his eye is like that."

Another clip recorded by Hickman's bodycam shows Rush and Hickman having a shockingly calm conversation outside Asheville's Mission Hospital about the events that took place nearly two hours prior.

​"I'm sorry for anything I did wrong to y'all," Rush tells Hickman. "I didn't mean for this to happen."

Hickman later responded by saying, "we didn't either."

"What's done is done. We're all going to go with our lives and this will never happen again and we will probably never see each other again," he added.

Hickman, who resigned from the department in January 2018, is currently facing state criminal charges and is the subject of a federal civil rights investigation for his decision to use "dangerous and excessive force" against Rush.

According to the Monday statement, the incident also led to Sgt. Taube being sent to mandatory retraining after department officials concluded that her behavior during the arrest "constituted unsatisfactory performance under [Asheville Police Department] policy."

Asheville Police Chief Tammy Hooper and other city officials pointed out that they "remain motivated to create a culture of respect and professionalism and to hold individuals accountable when that does not happen."