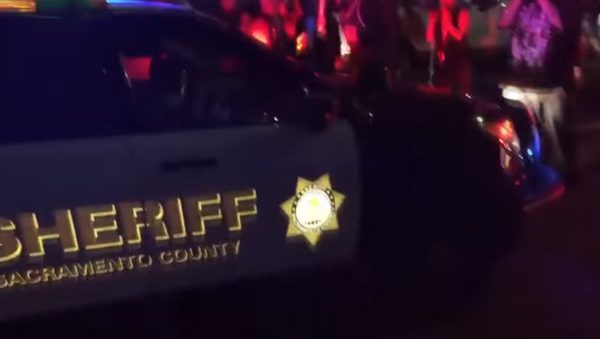 The footage, which was obtained by CBS News correspondent Mireya Villarreal, was recorded from inside a Sacramento Sheriff's Department SUV. About three dozen protesters were standing around two Sheriff's Department vehicles that had pulled up on Florin Road, where protesters were marching on Saturday night. The sheriff's deputy in the first car sounded his siren and told protesters to back away from his vehicle multiple times. As the first sheriff left the scene, a second sheriff's vehicle, which was parked behind the first car, followed closely behind, knocking protester Wanda Cleveland to the ground.

According to Cleveland, she started walking toward the curb after the first sheriff's vehicle left the scene. However, before she got to the curb, the driver of the second vehicle accelerated, hitting her.

Cleveland sustained injuries to her head and elbows. Once she was on the ground, she rolled out of the way for fear of being run over by the deputy.

"I could hear the tires roll past me," she told the Washington Post.

Following the collision, another protester, Phuong Le, rushed to Cleveland's side and held her head until paramedics arrived.

"This was a hit-and-run," said Andre Young, a protester who witnessed the incident. "Police have to be better than this."

"I want to know what he was thinking," Cleveland told the Washington Post from the emergency room. "Is my life not that important?"

"If I did that, I'd be charged. It's disregard for human life… He had to have known he hit me. I went flying through the air," she added.

​In a statement released this week by the Sacramento County Sheriff's Department, they claimed the collision occurred at "slow speeds" after protesters were "yelling while pounding and kicking the vehicles' exterior." The release did not specify why deputies left the scene after hitting Cleveland or if the two sheriffs who were at the scene of the incident would receive any disciplinary measures.

The Sacramento Sheriff's Department and the California Highway Patrol are currently conducting an investigation of the incident.

Cleveland was released from Kaiser Permanente South Sacramento Medical Center on Sunday. She still has bruises on her arm and the back of her head and is currently recovering at home.

On March 18, two Sacramento Police officers shot and killed 22-year-old Stephon "Zoe" Clark. Police were responding to reports of a suspect breaking windows of vehicles and said they feared Clark, who was in his grandparents' backyard, had a gun, but in reality Clark only had a cell phone. An independent autopsy performed at the wishes of Clark's family found that of the 20 rounds fired at Clark by officers, seven struck him in the back, indicating he was facing away from the officers at the time of the shooting, Sputnik reported.

Multiple protests erupted in Sacramento after the killing, with demonstrators shutting down major streets and a highway, a city council meeting and two games of the US professional basketball team the Sacramento Kings.