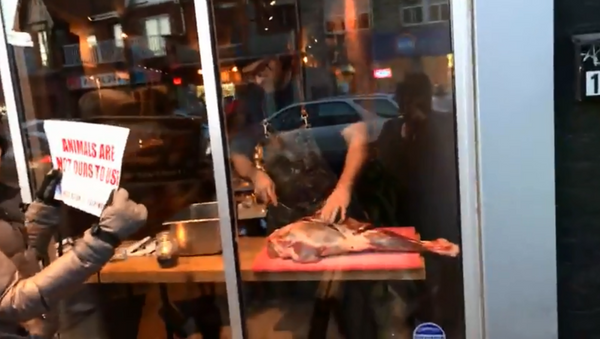 © Screenshot/Len Goldberg
Subscribe
More than a week after the owner of Toronto's Antler restaurant carved up a deer leg in front of animals rights activists, the determined protesters came back for another round Saturday to continue their fight.

​The demonstration was the fifth staged by the group in front of Antler since December 2017, which is known for serving up native Canadian meats including, bison, rabbit, duck, deer and boar. However, this was the first time the group convened at the sight after Michael Hunter, the restaurant's owner, decided to slice and dice a deer leg and then proceed to eat it in front of them.

Organizer Marni Ugar told CBC News that despite getting a lot of heat from people over their cause, there were others who also offered them support.

"We've been getting a lot of support, but also anger from a lot of people all over the world," Ugar told CBC News. "The owner of the restaurant is a hunter, so we certainly have the pro-gun Americans really angry at us, and anger because people get defensive if they think they are being attacked about eating animals."

"Animals don't care that they are being served in a small restaurant. That's their life, not ours to take," she added.

Reflecting on the deer incident, Len Goldberg told the publication that his comrades were extremely upset after seeing the leg being "desecrated and defiled" by Hunter.

"There's a mix of emotions when you see the leg of an innocent being being carved up in front of you to taunt you," Goldberg said. "There's a lot of sorrow when you see that because we know that leg belonged to a being."

"We're there with positive messaging. Get animals off the menu and get health and humane onto the menu," he added.

Cathy Stableford, an activist at the Saturday event, explained to CTV News that she was in attendance because the owner is taking part in "raising and farming and exploiting and murdering innocent animals that have the right to live."

Although Hunter has not released a statement on the continuing protests, he did tell local media outlets that Antler hasn't had any issues with attracting customers since the March 23 incident.

It's unclear how long the protests will go on.

000000
Popular comments
So let me get this straight. Because these people have given up on eating meat the whole world is suppose to?
Mitach2002
4 April 2018, 02:23 GMT3
000000
Sadly, no shortage of libtards in Canada. I don't see them protesting the wolves, grizzlies and mountain lions that eat rabbits, deer, caribou, etc. Animals eat animals. How can it be wrong for humans to eat animals, too?