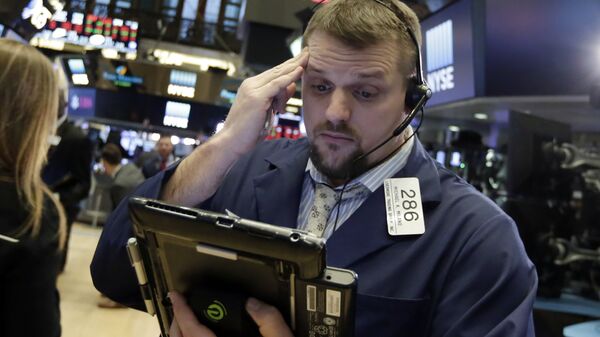 Financial markets in the United States took another tumble on Monday on the heels of Beijing's announcement of tariffs on US products in retaliation to US President Donald Trump’s decision to tax up to $60 billion worth of goods imported from China.

The Dow sank from 24,076 at the start of trading on Monday to 23,638, a roughly 1.9 percent drop. The S&P 500 index, which tracks the 500 largest publicly traded companies on the New York Stock Exchange and Nasdaq, shed about 2.2 percent of its value.

Tech stocks were hit especially hard: Amazon dropped after Trump tweeted the company is "not on a level playing field." Netflix stock also dropped off 5 percent. Upon news that Apple will use their own processors in Mac computers in the coming years, chip processor stocks fell.

Beijing announced tariffs of up to 25 percent on at least 120 US products on April 2 as a way to offset losses incurred from Trump's tariffs, which target aluminum, steel and Chinese tech products.

According to Al Jazeera's Adrian Brown, reporting from Beijing, the Chinese response is likely only the first of many rounds.

"We hope that the US will abolish as soon as possible the measures that contradict the rules of the World Trade Organization (WTO). This will facilitate the return of trade in relevant goods between the US and China to a normal state," China's Commerce Ministry said Monday.

The White House, however, has doubled down on its antagonistic rhetoric.

"China's subsidization and continued overcapacity is the root cause of the steel crisis. Instead of targeting fairly traded US exports, China needs to stop its unfair trading practices, which are harming US national security and distorting global markets," White House Deputy Secretary Lindsay Walters said Monday.