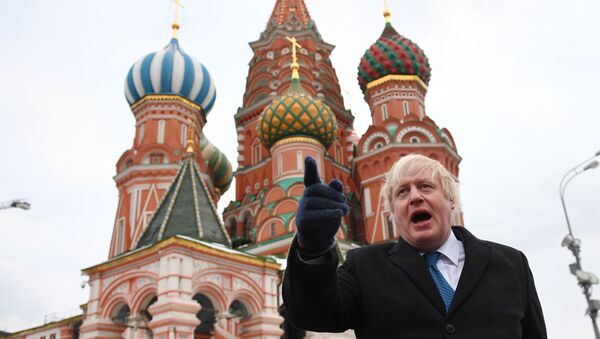 According to the report, those events just didn't happen. Instead ‘Russian State Aggression' is the thing we should all be worried about. The long litany of alleged Russian crimes include ‘supporting the Assad regime‘ and the ‘illegal annexation of Crimea'. Never mind that the so-called ‘Assad regime‘ requested Russian assistance in fighting ISIS [Daesh]*/al-Qaeda* linked jihadists whose co-ideologists have brought terror to the streets of Britain.

EXCLUSIVE: 'Shoot at All Targets on Maidan': New Evidence of Georgian Snipers
Nor that the predominately Russian people of Crimea voted overwhelmingly in a democratic referendum to return to Russia following a western-backed regime change operation in Ukraine in which virulently anti-Russian nationalists and neo-Nazis provided the cutting edge. Let's not let little things like facts get in the way shall we?

Despite the British government providing no proof that Russia was responsible for the poisoning of Sergei Skripal and his daughter Yulia in Salisbury, or indeed that the Novichok nerve agent was definitely used, the report states boldly: The indiscriminate and reckless use of a military-grade nerve agent on British soil was an unlawful use of force by the Russian State.

The truth is that the official government narrative on Salisbury has more holes in it than a slab of Swiss cheese.

And that was before we were told last week that the oh-so-deadly nerve agent was probably on the Skripal's front door- the door which police officers had been touching on a regular basis as they came in and out of the house.

Police went in and out of #Skripal door for 3 weeks, before they found the “nerve agent” — at the door.
That’s really interesting. Any questions? pic.twitter.com/NRO4wIjAw3

As in 2003, with the UK government's Iraqi WMD claims, a conspiracy theory is being presented as 100% established fact.

Everything is back to front. We've entered the ‘Through the Looking Glass' world of Lewis Carroll- where we‘re being asked by Theresa May and co to believe six impossible things before breakfast.

Far from posing a threat to British security, Russian actions in the Middle East are actually making British citizens safer. It's the UK government which has been putting our lives at risk- not the ‘evil Putin‘.

Fact-Checking the Report Used by UK to Press Allies to Expel Russian Diplomats
The UK‘s neo-conservative foreign policy — which has been followed by Labour and Conservative governments over the past 20-or so years, has involved targeting independently-minded secular states for violent regime change. None of these states threatened Britain or the British public. On the contrary, they were actually opposed to the extremist terror groups who DO pose a threat. By working to destabilise countries such as Iraq, Libya and Syria, the UK government has greatly boosted the cause of global terrorism.

Saddam Hussein may have been a dictator but he was never going to attack Britain. By toppling the Iraqi strongman, and dismantling the entire state apparatus, Britain facilitated the rise of the Islamic State [Daesh] — a group whose adherents have carried out attacks against UK citizens.

In Libya, Britain — and NATO acted as the air-force of radical jihadist groups — as part of their strategy to oust Muammar Gaddafi. Members of the so-called Libyan Islamic Fighting Group were able to travel freely between Britain and Libya.  ‘The evidence points to the LIFG being seen by the UK as a proxy militia to promote its foreign policy objectives,' writes Mark Curtis. ‘Both David Cameron, then Prime Minister, and Theresa May — who was Home Secretary in 2011 when Libyan radicals were encouraged to fight Qadafi — clearly have serious questions to answer.'

The first major ‘blowback' to British citizens of the UK government‘s Libya policy came in 2015, when British tourists were killed by terrorist attacks in neighbouring Tunisia. One was killed in an attack on the Bardo National Museum in March 2015, while three months later, 30 British tourists lost their lives in the holiday resort of Port El Kantaoui. Among those killed was Denis Thwaites, a former professional footballer with Birmingham City. Tunisia had been a safe place for British tourists — before Cameron and co set about ‘regime-changing' Libya and turning the country into a jihadists playground. It was reported that the Port El Kantaoui terrorist, Seifeddine Rezgui, had trained in an ISIS camp in ‘liberated' Libya.

Then in May 2017, 22 people were blown up when leaving a pop concert in Manchester by Salman Abedi. The radicalised bomber had only returned from ‘liberated' Libya a week earlier and is believed to have fought with his father with the LIFG, against Gaddafi — (and on the same side as NATO), six years earlier.

Again, remind me who is the biggest threat to UK security — the UK government — or Russia?

Declassified Files Reveal Secret UK Support for Mujahideen in Afghanistan
Having ticked off Libya from their ‘To Do' list, the neocons in the UK government turned their attentions to Syria. Again, here was a country whose secular government posed no threat to the UK. President Bashar al-Assad, who trained as an eye doctor in London and whose wife Asma was born in England and brought up in Acton, could have been an ally, if the UK had been genuinely interested in fighting Islamist terrorism. But instead the UK supported hardcore Islamists, euphemistically referred to as ‘rebels‘ to try and bring down the Assad government.

In June 2015, Seumas Milne reported how a trial in London of a man accused of terrorism in Syria had collapsed — when it emerged that British Intelligence had been backing the very same ‘rebel‘ groups the defendant was charged with supporting.

‘Clearly, the absurdity of sending someone to prison for doing what ministers and their security officials were up to themselves became too much‘, Milne noted. But it was not an isolated case.

The government is now talking about a new ‘Fusion Doctrine' to ‘strengthen our collective approach to national security'. But here's a better strategy. Let's change our foreign policy. Let's stop regime-change wars and destabilisation campaigns against countries which mean us no harm. Let's stop supporting jihadist ‘rebels' abroad in pursuance of neo-conservative objectives. Let's start respecting international law. And let's stop blaming Russia for problems which have been created at home.