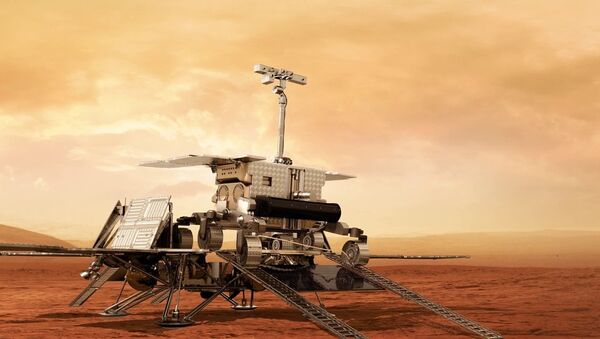 Mankind could be one step closer to finding or even bringing life to Mars with the successful test of the two giant parachutes attached to a payload. The European Space Agency, in conjunction with Russia's space agency, is now ready for a new phase of testing for the deployment of a rover on the Red Planet.

"It was a very exciting moment to see this giant parachute unfurl and deliver the test module to the snowy surface in Kiruna, and we're looking forward to assessing the full parachute descent sequence in the upcoming high-altitude tests," ESA's Thierry Blancquaert said, according to a statement. That phase will include drops from 98,000 feet (30km) above the Earth's surface.

​The test was captured on multiple cameras, including GoPros that were integrated into the 1,102lbs (500kg) payload with a 3-mile cord. Scientists packed all the components up into a canister and dropped everything from 4,000 feet (1.2km) in the air from a helicopter in Kiruna, Sweden, to test the system's deployment in sub-zero temperatures.

The first, smaller parachute deployed normally during testing. Twelve seconds later, the big one whipped into action and brought the object safely to the surface of the Earth in two and a half minutes.

"It's the biggest parachute that's ever been flown on a Mars mission, and a parachute that sizes has to be deployed very, very sequentially; very, very carefully. Otherwise it can be damaged during deployment," said John Underwood, principal engineer at Vorticity Ltd, which partnered with two other companies and the ESA to conduct the test of the larger parachute. The parachute is about 115 feet (35m) in diameter, with 112 lines connected to the drop test. The parachute itself weighs a whopping 430lbs (195kg).

​The parachute and rover are scheduled to launch in July 2020, but aren't expected to reach Mars until March 2021, as part of the ExoMars mission. The rover will be the first to dig down on the Red Planet to look for evidence of life that has been shielded from the intense radiation on the surface.

ESA is prioritizing testing of the parachute system after the first part of its mission turned into a major bust in 2016. The Schiaparelli landing craft they had sent out with an orbiter had a devastating crash landing on Mars October 19, 2016. A one-second inertial mismeasurement caused the on-board computer to act as though it was landing even though it was still 12,000ft (3.7km) off the planet's surface.

000000
Popular comments
For the 1,982 pound Curosity Mars Rover, the USA used an intricate sequence of maneuvers conceived and choreographed to reduced the speed of the descending rover until it could be safely lowered to the ground via a hovering, rocket-powered sky crane.