No to 'Occupation Forces': WATCH Militia in Raqqa Allegedly Shell US Base 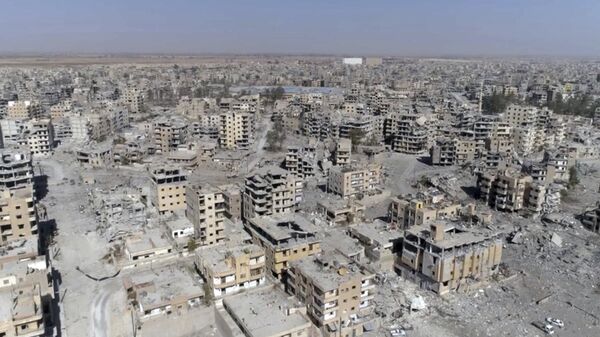 © AP Photo / Gabriel Chaim
Subscribe
International
India
Africa
Local residents have been expressing their discontent with the policy conducted in Raqqa by the Syrian Democratic Forces (SDF) and the US coalition-appointed authorities. They took their protest to the streets on March 27 and organized a resistance militia.

The press service of the Popular Resistance of Raqqa (PRoR) announced earlier today that it had fired several mortar shells at a US-occupied military base near the city, where he 93rd Brigade was deployed. PRoR also claimed that it will not tolerate "the occupation forces" on the Syrian territory, like the US and Turkey.

The Telegram channel Directorate 4, which monitors the situation in Syria and Iraq, posted an alleged video of the shelling on its YouTube channel. According to it, this was the first operation conducted by the group. The channel cites PRoR, who announced they will continue their fight until SDF and the US are expelled from Syria.

The first reports of PRoR appeared early in March, saying that they covertly recruit locals, who are opposed to the US appointed government's policies and the US-backed SDF. News about a full scale uprising in Raqqa appeared on March 30, allegedly due to the inability of the appointed government to deal with the humanitarian situation in the city and the forced mobilization. So far, no other information on the group's activity has been reported.

Raqqa had been under Daesh* control for four years since 2013 and was considered its headquarters. The SDF and the US-led coalition launched a campaign against the terrorist group in the city on June 2017 and declared it "clear" in October.

According to UN investigators, massive airstrikes conducted during this campaign resulted in numerous civilian casualties. The US coalition claims that it has found no evidence of this. Damascus considers Raqqa occupied, as the US operates on Syria's territory without its authorization or a UN mandate.