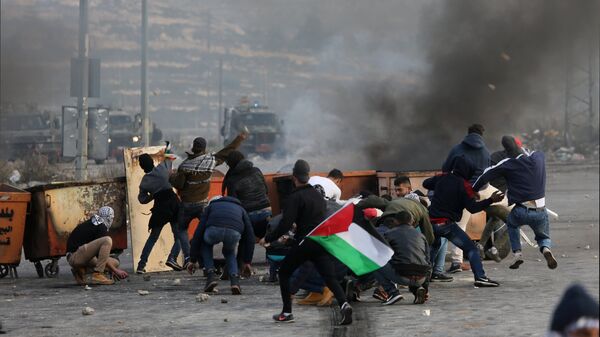 The senior parliamentarian has denounced the killings of dozens of Palestinians by the Israeli Defense Forces as an “act of crime and inhumanity by the illegitimate and usurping Zionist regime against the demonstrations by the nation of Palestinians.”

“The only language that the terrorists ruling in Tel Aviv can understand is the language of force and resistance is the only solution to counter the ambitious ends of the Zionist regime,” Larijani’s statement read.

Larijani, the current president of the Parliamentary Union of the Organization of Islamic Cooperation Member States (PUIC), proceeded to say that Israel’s recent actions represented “the continuation of the frequent crimes committed by the Zionists under the protection provided by US government.”

According to him, Israel’s policy of creating tensions along with Trump’s decision to move the US embassy from Tel Aviv to Jerusalem was part of a “dangerous plot,” which puts regional stability in peril. In conclusion, Larijani urged the parliaments of the OIC member-states and other nations to denounce Israel’s actions, support the Palestinians and deter the “Zionists” from triggering a fresh crisis.

The United Nations Security Council held an emergency meeting on March 30 over the situation in the Gaza Strip, calling for an “independent and transparent investigation” into the deaths of dozens of protesters.

On March 30, at least 16 Palestinians were reported to have been killed and over 1,500 injured on the Israeli-Gaza border as a result of Israeli security forces actions during the first day of the six-week Palestinian protest, called “The Great Return March,” focused on the Palestinian refugees’ right to return to their homeland.