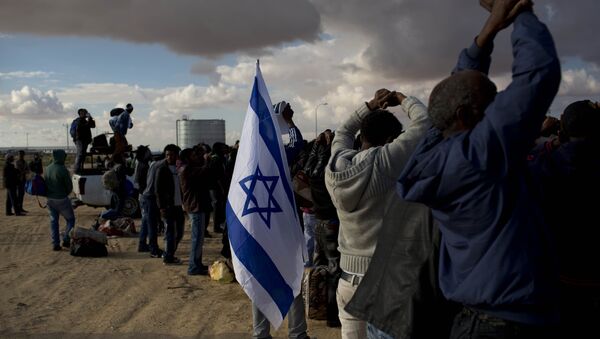 The deal effectively cancels an Israeli plan to deport some African migrants back to Africa, The Jerusalem Post newspaper said, citing a statement from Prime Minister Benjamin Netanyahu's office.

According to the Israeli media, Israel and the United Nations Refugee Agency have reached an agreement to deport some 16, 000 African migrants to European countries.

"Israel and the UN Refugee Agency have reached an unprecedented agreement over the issue of migrants. UNHCR will be working at moving these migrants to western countries, while Israel will be working at settling a refugee status of those, who stay," the statement reads.

The deal will be reportedly implemented over five years.

Peace Accord With 'Anti-Semite' Erdogan May Have Been Mistake - Israeli Minister
The agreement was reportedly approved by Israeli Attorney General Avichai Mendelblit and conforms with the practices of international law.

Next month, Israeli Prime Minister Benjamin Netanyahu announced the beginning of the deportation procedure. Within the framework of the Israeli plans, about 40,000 undocumented migrants from Africa should leave the country or face indefinite detention. However, the High Court has temporarily suspended the deportation plan until the revision of an anti-deportation petition.