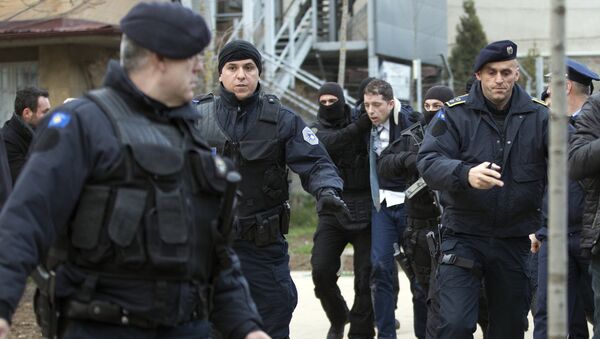 © AP Photo / Visar Kryeziu
Subscribe
International
India
Africa
Serbian representatives to the Kosovo government have announced their exit from the body after the director of the Office for Kosovo and Metohija, Marko Djuric was expelled from the region. Sputnik has discussed the possible implications of this move on the future of relations between Belgrade and Pristina with political experts.

The Incident is a Result of Political Feud

With the recent Serbian demarche, Ramush Haradinaj's government is facing possible dismissal and even new elections. Nexhmedin Spahiu, a political scientist from Kosovo, notes that Haradinaj has enough people to garner a majority government without Serbs, but he can't do so, as some of the seats are ethnically reserved. He recalls though that the people occupying these posts do not necessarily have to be members of the party — just being Serbian would suffice.

If the problem isn't solved new elections must be conducted, but Haradinaj himself expressed hope that the Serbs would change their minds, because otherwise they won't be able to protect their national interests.

Milivoje Mihajlovic, an expert on Kosovo from Belgrade, sees the incident as a part of a political feud. He is confident that President of Kosovo Hashim Thaci wants to demonstrate he is capable of handling tough situations in order to protect himself from possible prosecution over Kosovo Liberation Army war crimes. Mihajlovic recalls that Thaci recently had a talk with EU top diplomat Federica Mogherini, where he explained that he had demanded Kosovo citizens to uphold the peace. Another reason behind the move may be a desire to create problems for his political rival — Ramush Haradinaj

Four Scenarios on the Development of Kosovo-Serbian Relations

Zeljko Cvijanovic, a political scientist, says that negotiation process between two states is currently deadlocked, as is the process of admission of Kosovo to the UN.

"The US can't pressure the Serbs like they used to in the 1990s or 2000s. The world has changed. Stronger pressure will push Serbs towards Russia and China. Something was needed to be done in Kosovo, so the situation in the region changed more or less," Cvijanovic said.

According to the political scientist, there are several scenarios on how the situation might play out. The first suggests an attack on the civilian Serbian population in Kosovo and their exodus to central Serbia. The key idea behind that is to threaten the Serbian government in Belgrade with such an exodus (and according to the expert no government there will survive that) to force them to accept any deal the US offers.

The second scenario suggests Serbia shifting priorities from entering the EU to keeping Kosovo under its wing. Cvijanovic is adamant that the idea of joining the EU has been limiting Serbia's options for ten years already. He notes though, that such a scenario will face backlash from the West and could even lead to attempts to overthrow the government through the stimulation of internal conflicts or some kind of revolution.

Third in line is the incident will be forgotten and negotiations will continue, said Cvijanovic. In this case the conflict will sway back and forth from the frozen to active phase.

The political scientist gives little credence for the radical scenario, whereby Albanians attempt to seize Northern Kosovo, predominantly inhabited by Serbs and Serbia retaliates. He adds that regardless of whichever scenario will be chosen, the Kosovo issue won't be resolved within the next five years.

The views and opinions expressed are those of the speakers do not necessarily reflect those of Sputnik.