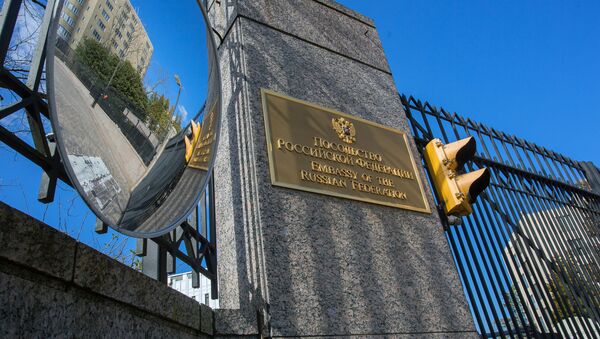 Buses with diplomats and escort vehicles have left the territory of the Russian Embassy in Washington, D.C., the Rossiya 24 television channel reported.

The bus with diplomats, who were proclaimed personae non gratae in the US, has left the embassy building, under the march "Farewell of Slavianka", the same as the diplomats in London some time before.

The second bus with the diplomats will move toward the airport at 3 p.m. local time (19:00 GMT).

Along with the family members a total of 171 people will leave the United States on Saturday on two planes. One of these aircraft will also visit New York and take 14 families from this city.

Expulsion of Russian Envoys From UN Mission Conflicts Int’l Agreements - Moscow
Earlier, the US Administration expelled 60 Russian diplomats and closed the Russian Consulate General in Seattle after Sergei Skripal, a former Russian spy who worked for UK intelligence, and his daughter Yulia were exposed to what UK experts claim was an A234 nerve agent.

London has proclaimed that it was "highly likely" that Moscow was behind the attack. The UK government has expelled 23 Russian diplomats from the country. Expressing solidarity with the United Kingdom, the United States and over 25 other countries also expelled Russian diplomats. Russia responded by expelling reciprocal number.