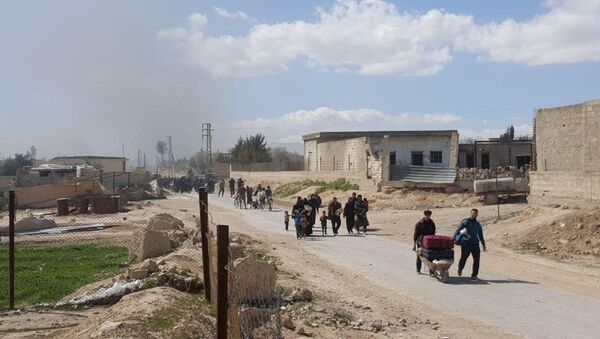 A total of 153,140 people have been evacuated from the area of Eastern Ghouta with the assistance of the Russian reconciliation center for Syria since the introduction of humanitarian pauses on February 28, the center said.

"In total since the humanitarian pauses were introduced, 153,140 people have been evacuated from the Eastern Ghouta with the help of the Russian Centre for Reconciliation," center's commander Maj. Gen. Yuri Yevtushenko said at a daily briefing on Saturday.

Moreover, about 40,000 militants and their families were evacuated from four settlements in Syria’s Eastern Ghouta and were transported to the Idlib province in course of an eight-day operation on withdrawal of the Faylaq al-Rahman militants from the area, the Russian reconciliation center for Syria said on Sunday.

Syrian Army Neutralizes Dozens of Suicide Bombers in Eastern Ghouta – Reports
"Since the beginning of the humanitarian operation by the past day, 41,126 militants with families have been withdrawn from Arbil, Jobar, Ein-Tarma and Zamalka. They were escorted by the Syrian patrol cars, SARC ambulance cars and Russian military police to Qalaat al-Mudik, the Idlib de-escalation zone," Yuri Yevtushenko said.

Yevtushenko added that 34 hostages held by militants were released in course of an operation unprecedented in its scale.

IN addition, more than 29,000 civilians have left Syria's Eastern Ghouta through the Muhayam al-Wafedin humanitarian corridor since the introduction of humanitarian pauses on February 28, the Russian reconciliation center for Syria reported.

"A humanitarian corridor for Douma residents is functioning with a checkpoint at Muhayam al-Wafedin. Required infrastructure has been deployed in the area to provide people with assistance. Today, 128 civilians left the city via the humanitarian corridor. Since February 28, in total, 29,230 people have left Douma via the corridor," center's commander Maj. Gen. Yuri Yevtushenko said at a daily briefing.

Yuri Yevtushenko added that the evacuation of the members of the Ahrar al-Sham and the Faylaq al-Rahman groups from Syria's Eastern Ghouta had proved the promising outlook of the work on making the Jaysh al-Islam militants lay down arms.

"Successful operation on withdrawal of the Ahrar al-Sham illegal armed formation and most part of the Faylaq al-Rahman from the Eastern Ghouta has shown promising outlook of taken measures to make the Jeyish al-Islam radical group left in the enclave cease hostilities and disarm," center's commander Maj. Gen. Yuri Yevtushenko said at a daily briefing.