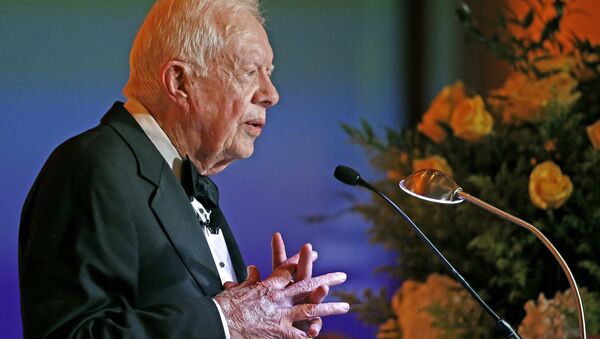 Appearing on the CBS Late Show, former US President Jimmy Carter admitted that the United States “apparently” wanted a “kind of jerk” for a president and said that he prays for current US President Donald Trump to keep the country at peace.

"Apparently, from this recent election, yes," Carter replied, sparking laughter from the audience.

At the same time, Carter acknowledged that he prays for Trump.

Jimmy Carter Calls Bolton's Nomination 'One of Trump's Worst Mistakes'
Later in the interview, the two recalled Carter's 1980 remark when Edward Kennedy was expected to run for the President, Carter was reported to have said: "I'll kick his ass," — an unimaginable colloquialism at that time. Carter acknowledged that he made the remark to an unnamed congressman, and that lawmaker later quoted the 39th president.

"But it is true, I did that," Carter admitted.

On a more serious note, Carter strongly criticized the use of US-imposed sanctions on foreign countries.

"When we impose sanctions, we become responsible for anything that goes wrong in that country," he said, noting that countries under sanction, including Cuba and North Korea, see burgeoning humanitarian problems, like food shortages, and US sanctions only make the problems more acute and "hurt the people."

Colbert displayed Carter's latest book, in which the former US president expressed concerns that racial and other cultural divisions among Americans have gotten worse since Trump was elected in 2016.