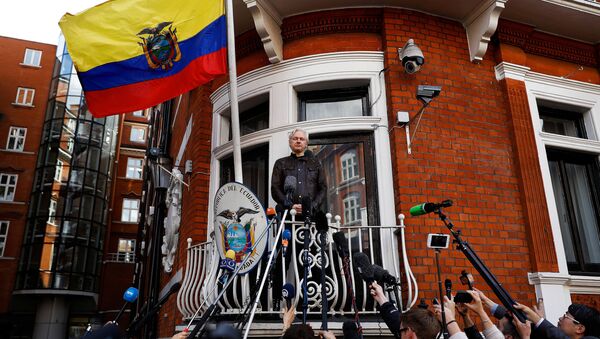 © REUTERS / Peter Nicholls
Subscribe
On Tuesday, the Ecuadorian government cut off Assange’s communications with the outside world from its London embassy, where the founder of the whistleblowing WikiLeaks website has been living for nearly six years.

On Wednesday, the government of Ecuador said it had switched off outside communications of Assange, currently staying at the Ecuadorian embassy in London. According to Quito, the messages posted by Assange on his social networks pose a threat to Ecuador's relations with the United Kingdom, as well as with other states.

A number of human rights activists, journalists and artists have signed an open letter to Ecuadorian president Lenin Moreno urging him to restore internet and telephone access to WikiLeaks founder Julian Assange who has been holed up at the country’s embassy in London.

"We call on the government of Ecuador to allow Julian Assange his right of freedom of speech… We ask that his basic human rights be respected as an Ecuadorian citizen and internationally protected person and that he not be silenced or expelled… We call on President Moreno to end the isolation of Julian Assange now," the letter published on the website of the Courage Foundation said.

The full text of the letter, and the list of signatories is now online here: https://t.co/utqoXZ2hxV https://t.co/qOhw6WYGRl

FBI Grills Farage Ally About Trump's Campaign - Reports
The Ecuadorian authorities have explained their action by stating that “Assange’s behavior, through his messages on social media, put at risk the good relations this country has with the UK, the rest of the EU and other nations.”

In a tweet on Monday, Julian Assange challenged London’s accusation that Russia was responsible for the nerve agent poisoning of Sergei Skripal and his daughter earlier this month.

Julian Assange has lived in the Ecuadorian embassy since he applied for asylum in June 2012 to avoid extradition to Sweden over allegations of sex crimes that he denies. He fears that Sweden will hand him over to the US where he faces possible prosecution over WikiLeaks’ activities.

000000
Popular comments
He is a guest on the Embassy and as such he has to respect the rules, simple as that. It's the Ecuadorian Embassy, not Casa Assange...