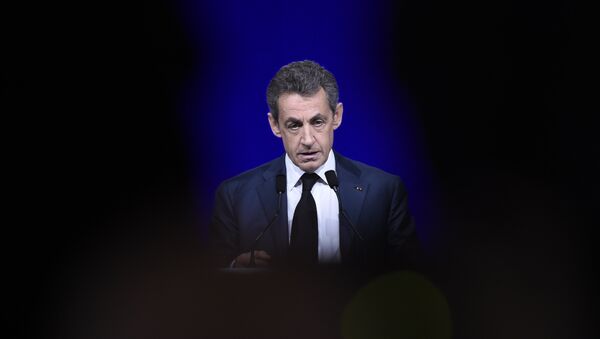 John Wight
All materials
None other than Julius Caesar reminds us that “fortune, whose power is very great in all spheres, but particularly in warfare, often brings about great reversals by a slight tilt of the balance.”

The wisdom contained in the words of Rome’s most famous and illustrious emperor, a man whose very name is synonymous with power, is confirmed in the plight of Nicolas Sarkozy, former President of the French Republic for whom ignominy beckons with the news that he has been charged with corruption and influence peddling. Specifically, he is accused of attempting to suborn the senior judge who was heading the investigation into Sarkozy’s 2007 presidential campaign, concerning campaign finance illegalities.

The announcement that French authorities have decided to formerly charge the country’s former president with criminal wrongdoing on this matter comes on the back of the revelation that another investigation has begun in the wake of the allegation that Sarkozy accepted millions in illegal campaign donations from Libya’s Muammar Gaddafi to help finance his 2007 bid for the presidency.

Repaying Debts With Death: Gaddafi Supporters Expose Sarkozy’s Libyan Connection
Surveying this turn of events, I insist on being allowed a moment to revel in the prospect of the downfall of this grubby little opportunist. A man who once bestrode French society like a car mechanic enjoying a sly week driving round in the Bentley belonging to one of his customers, passing himself off as the owner in a borrowed designer suit, Sarkozy was the archetypal first rate second rate man, of a type well known on the right of the political spectrum.

Call it kismet, call it karma, the fact that Muammar Gaddafi’s will be the name that accompanies Sarkozy to prison if convicted has to count as something approximating to poetic justice. For in reaching out from the shallow grave in which his violated and butchered body rests somewhere out in Libya’s vast tracts of desert, Libya’s former leader is now on course to being the author of the Frenchman’s downfall.

Libya's fate in 2011 will forever stand as an indictment of Western foreign policy. It confirmed NATO’s role as an instrument of Western imperial power, dropping 'democracy bombs' on a beleaguered North African country that found itself caught up in the vapour trails of an Arab Spring that had already succeeded in removing pro-West dictatorships in Tunisia and Egypt.

The uprising in Libya, emanating in Benghazi in the east of the country, was presented in the West as a revolution against a brutal dictator in the cause of democracy and liberty. NATO'’s intervention, beginning in March 2011 under the auspices of UN Resolution 1973, was predicated on the claim that Gaddafi’s forces, approaching Benghazi to quash the uprising in its initial stages, had been directed by the Libyan leader to show “no mercy” to the city’s residents.

Guilt Trip: Was Intervention in Libya Sarkozy's Bid to Hide Campaign Funding?
However his version of events has been refuted. In an article for the Boston Globe in April 2011, Alan J Kuperman writes: "The 'no mercy' warning, of March 17, targeted rebels only, as reported by The New York Times, which noted that Libya’s leader promised amnesty for those 'who throw their weapons away.' Khadafy (sic) even offered the rebels an escape route and open border to Egypt, to avoid a fight 'to the bitter end'."

When it comes to the specific character of this Libyan revolution, in August 2011 the BBC confirmed how "Islamists have played an important part in the uprising."

In particular, the Islamist leader Abdul Hakim Belhaj, former head of the Libyan al-Qaeda affiliate, the Libyan Islamic Fighting Group (LIFG), was a key figure within the leadership of the 2011 insurgency. As an aside, under Belhaj’s leadership, the LIFG was known to have attempted to assassinate Gaddafi three times during the 1990s, prior to the group being crushed by the country’s security forces in 1998.

In point of fact, rather than intervene in order to protect civilian life, as mandated under UN Resolution 1973, NATO intervened on the side of an insurgency in which Islamists — people adhering to the same ideology embraced by those who carried out the terrorist atrocity of 9/11 in the US, the 7/7 terrorist atrocity in London, the Madrid bombing in 2006, along with a litany of other such Islamist terror attacks across Europe and the US since — were in the vanguard.

This truth places Sarkozy's now infamous appearance in Libya in September 2011 in damning context. The then French president had descended on the country in the company of his British counterpart David Cameron to bask in the adulation of the assembled crowds and spout platitudes of enlightenment and freedom. Of course, Cameron and Sarkozy’s eagerness for military intervention in 2011 had everything to do with democracy and nothing – nothing whatsoever — to do with the prospect of securing oil contracts that would be up for grabs in the 'new Libya'.

Why, perish the thought.

Expert Explains What Future Holds for Sarkozy Amid Libya Investigation
Seven years on and Libya is a country mired in strife, the promises made to its people of a better tomorrow — promises which issued from the lips of Sarkozy and Cameron, along with Obama and Clinton – exposed as the cruellest of jokes. For France’s former president an appointment with destiny now awaits in the form of a trial for corruption and a second investigation into campaign finance fraud, involving the very same Muammar Gaddafi whom he helped propel to the most gruesome of ends.

On such occasions, Shakespeare is indispensable: "The croaking raven doth bellow for revenge."