Not a James Bond Movie, But Close: Swiss F/A-18 Takes Flight from Mountainside 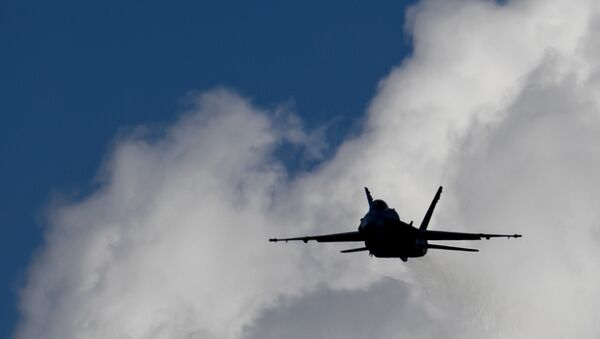 In news that would make Dr. No proud, a new report reveals that the Swiss Air Force maintains a secret air base nested inside of a mountain where camouflage doors open for an F/A-18 Hornet take off and conduct air patrol missions.

Defense News reported Friday that Hornet patrols from its mountainside lair are business as usual for the Swiss Armed Forces. After conducting an air patrol, the Hornet lands outside the base. The plane is not able to actually land inside the mountain, even though it can take off from within the stone fortress. Instead, a crane puts the jet onto a platform that brings the warplane inside again. "The stealthy doors stay closed until the next flight," Defense News noted.

Why is this in the news? Well, the Swiss Armed Forces are starting a major modernization phase that will eventually allow them to retire their F/A-18C aircraft and dated F-5 Tigers, which primarily now fly only as aggressors during training drills, Defense News noted, and it would be nice if their replacements could utilize this base too, possibly even land inside it, although it's not a requirement, according to one Swiss officer.

A senior military official told Defense News that the name and location of the base are classified.

There are 30 F/A-18C Hornet fighter jets in the Swiss fleet. Five of them were grounded last month after officials found cracks in their landing flaps, Reuters reported.

No word on whether the Swiss keep a shark tank in the base for convenient and/or evil disposal of secret agents who might find it.