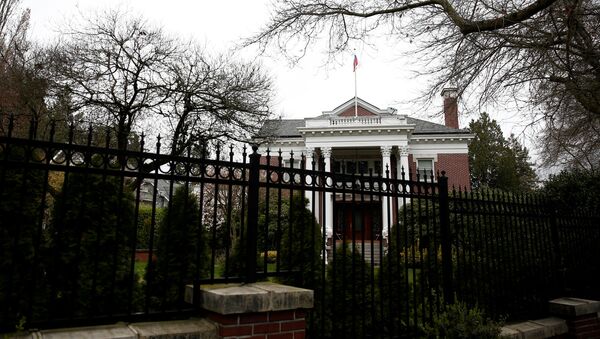 SEATTLE (Sputnik) - The residence of the Russian Consul General in Seattle will likely face the same fate as the one that the United States seized in San Francisco, Senior Consul Halit Aisin told Sputnik.

Halit Aisin said the building of the residence is Russia’s property, but added that everyone has been ordered to leave Seattle by 23:59 p.m. on April 24.

"This all is the undisguised seizure of our property, which does not fit into any norms of international law," the diplomat said. "Moreover, one of the US laws is violated here, the right to private property. This is our property. On what grounds did they seize it?"

The personnel of the Russian Consulate General in Seattle will be assigned to the country’s diplomatic missions in Washington, DC, New York and Houston, Senior Consul said.

"Our personnel will be distributed in our Consulates General in New York and Houston and the embassy in Washington, DC," Aisin said. "Several people, whose tours are ending, will return to Russia."

Expulsion of Russian Diplomats is Part of Demonization of Russia - Scholar
Halit Aisin confirmed that staff of the diplomatic mission managed to complete all of the packings. The doors of the Consulate General will be open for visitors until Friday evening.

"On March 30, we will finish receiving citizens. The access to the office for us will be terminated on Sunday, April 1, 23:59 PM," the diplomat added.

Meanwhile, the archives of the Russian Consulate General in Seattle, which will be closed on Friday upon the demand of the US government, will be transferred to the Russian Embassy in Washington DC, Halit Aisin said.

"We will take the archives to the embassy in Washington, DC," Aisin added. All of the applicants, residing in the area, then will have to contact either the embassy or the Consulates General in New York and Houston.

Several hundred people have already visited in a great hurry the Russian Consulate General in Seattle before the Friday's closure, Halit Aisin said.

"We are not counting, but approximately 250 to 300 people came yesterday," Aisin said on Wednesday. "As of 11:00 a.m. local time, some 100 people visited the Consulate General [after it opened for business at 9:00 a.m.]. Now we only issue documents. And yesterday’s experience showed our personnel how to serve our visitors more quickly."

Groundless Expulsion of Diplomats Narrows Way to Mend US-Russian Ties - Analysts
Aisin also noted that when the first news had been reported about the upcoming closure of the Consulate General, individuals who had earlier somehow postponed application procedures for needed documents, had immediately realized that they have to hurry.

"That’s why they all came. They are regretful and frustrated," Aisin added.

Meanwhile, from early morning, dozens of people of all ages, including families and the disabled, headed to the Russian Consulate General from all over the US West coast. Many of the visitors did not hide their shock and frustration at the US government’s decision and expressed concern as to the difficulties they are up against in obtaining necessary services.

Olesya Maximenko told Sputnik she came with her daughter from Vancouver — a three-hour trip — because her mother was diagnosed with cancer in Russia and she needs to visit her.

"My daughter needs a passport and we don’t have time now to get it here as the Consulate is about to close," Maximenko said. "I don’t know what is going to happen as time is very critical for us now."

Maximenko said she is shocked by the US government’s decision and noted that the Consulate helps "regular people with consular matters." "It shouldn’t be this way," Maximenko added.

Another applicant, Ayas Shamasov told Sputnik that the closure of the Consulate will lead to many problems for Russian citizens in the United States.

"The consulate in San Francisco is [already] closed, and we can’t even go to Seattle. We will now likely have to go to New York… it will create so many issues for Russian passport holders here," Shamasov said.

Get Out of Russia With Love: Twitter Decides Which US Consulate Should Close
Shamasov came with his friend, who is visiting him in San Francisco from Russia and lost his passport, after driving 14 hours upon hearing the US government’s decision.

"We only had a few days before the closure date, the last chance for us to try to get the document allowing my friend to leave the United States," he said.

Moreover, Ildar Mamedov travelled four hours from Oregon with his wife and three little children once being told on Tuesday about the ordered closure.

"This closure will very much affect the people who don’t have opportunity to go to the consulates on other states, particularly those who have little kids, the elderly and the sick," Mamedov told Sputnik, adding that people will have to take days off from work and engage in costly travel to obtain consular services. "Moreover, people were affected by the [earlier] closure of the Russian Consulate in California. They had to go to Seattle, and it caused long lines," he added

The White House said earlier in a statement that the consulate should be closed because of its proximity to a US submarine base and the defense contractor Boeing.

Moscow Slams US for Seizing Russian Diplomatic Property, Vows to Retaliate
Moreover, the US government on Monday ordered the expulsion of 60 Russian diplomats, including 48 employees of the Russian Embassy in Washington, DC and 12 staff assigned at the Russian mission to the United Nations in New York. The government said it initiated the move in response to the alleged Russian attempt to poison ex-intelligence officer Sergei Skripal and his daughter Yulia with a nerve agent.

However, US President Donald Trump despite lack of evidence and in contradiction to promises to improve relations with Moscow ordered the removal of 60 Russian diplomats from the US over allegations of involvement in the poisoning of former spy Sergei Skripal.

The Kremlin has strongly rejected accusations of any alleged involvement in the Skripal poisoning and has suggested helping in the investigation. However, Moscow's requests for samples of the chemical substance used to poison Skripal have been denied.

In early September, Russian diplomats lost access to several diplomatic properties when US authorities ordered the closure of the Russian Consulate General in San Francisco and trade missions in New York City and Washington, DC. US officials said the move came in response to Moscow's decision in late July to reduce the number of US diplomatic staff in Russia to 455 people, the same number of diplomatic personnel Russia has in the United States.

Russian Envoy to EU: 'Adequate Response' to Expulsion of Diplomats Expected
After Russian diplomatic staff left the compounds, US security agents entered the premises to conduct searches. Moscow said that the actions of the United States constituted a violation of international law, including the Vienna Convention on Diplomatic and Consular Relations.

Meanwhile, the US Department of State has pledged to secure the compound of the Consulate General in Seattle.

"We will secure and maintain those properties in keeping with our responsibilities," a State Department official told Sputnik on Wednesday.