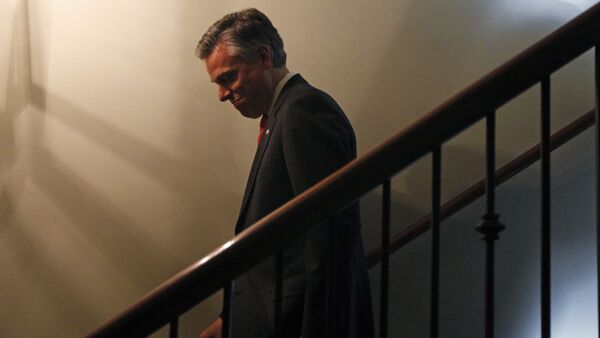 When asked about the possibility of arrest of Russian accounts, the US ambassador told Russia's RBK broadcaster on Thursday that such an option was possible. He added that he hoped for stabilization of bilateral relations, but noted at the same time that normalization was only possible if the existing problems were solved in a constructive way.

The decision of the US authorities to expel Russian diplomats over Moscow’s alleged involvement in the poisoning of former Russian intelligence officer Sergei Skripal was based on substantive evidence, Huntsman said.

Russian Envoy to US: 'Most Likely' Expulsion of Diplomats Planned in Advance
He added that he hoped for stabilization of bilateral relations, but noted at the same time that normalization was only possible if the existing problems were solved in a constructive way.

The ambassador told the RBK broadcaster that the United States believed that the information, provided by London on the issue, was rather convincing. Huntsman noted that Washington was confident in the thoroughness of the investigation carried out by the UK authorities, expressing the belief that the Organization for the Prohibition of Chemical Weapons (OPCW) would confirm the conclusions of London and Washington on the case.

"These are difficult times in the US-Russia relationship. Just this week you saw the United States along with our allies, partners and friends take action against Russia [over the Skripal case]… I have also said that despite our outrage at the Russian government's behavior, the bonds between our people remain strong. The door to dialogue is still open," Huntsman said in a video address published on Twitter by the US Embassy in Russia on Wednesday.

The US Embassy in Russia said Thursday that it was unable to accommodate all visa requests of the Russian Foreign Ministry, including for members of the Russian freestyle wrestling team, due to the "significant constraints" placed on the diplomatic mission by the Russian side.

"We have accommodated MFA's requests many times even despite the significant constraints Russia placed on the US Mission. We cannot accommodate all their many requests at all times, particularly for large groups," embassy's spokeswoman Maria Olson told Sputnik.

Earlier this week, over 25 countries, including the United States, decided to expel Russian diplomats over Moscow's alleged involvement in the attack on Skripal and his daughter. Moscow has slammed the move and vowed response, while the Russian ambassador to Washington emphasized that the US was expelling Russian diplomats responsible for areas of mutually beneficial cooperation and these actions cannot be justified.

Sergei Skripal, a former colonel of Russia's GRU military intelligence service who also worked for UK intelligence, and his daughter Yulia have been reportedly hospitalized in critical condition since March 4 as a result of exposure to what British experts claim was a A234 nerve agent. London has stated that it was "highly likely" that Moscow was behind the attack.