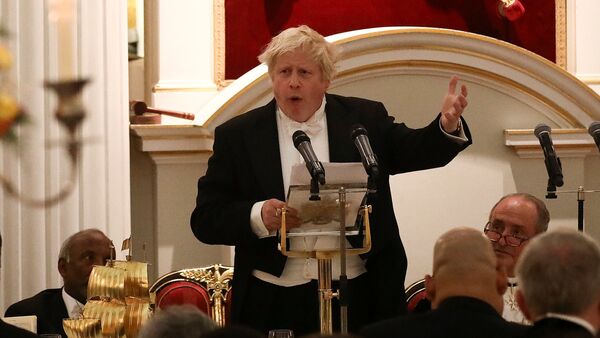 The UK’s top diplomat was wildly creative while addressing the guests of the Lord Mayor’s Easter Banquet in London as he elaborated on what’s behind the diplomatic row with Russia over the Skripal case. Twitter responded ironically.

The head of the UK Foreign Office dedicated his Easter greetings almost exclusively to the recent expulsion of Russian diplomats from 27 countries; he referred to the move as “kicking out people whose presence they deem to be no longer conducive to the public good.”

Boris Johnson managed to stuff it with Dostoevsky analogies, Star Wars references, a Monty Python tribute and an elaboration on the concept of “Global Britain,” promoting extensive UK expansion all over the world.

The diplomat began his speech by thanking the 27 countries that have expelled Russian diplomats. He stated that “their own Russia-based diplomats, and their families, must now deal with the possibility of their own lives being turned upside down.”

He also blamed Moscow for “the wearying barrage of Russian lies,” claiming, for example, that Britain has been told that Skripal’s “attempted murder was revenge for Britain’s supposed poisoning of Ivan the Terrible.” According to Johnson, the Foreign Office has counted 24 such “fibs.” He also saw ominous shadows of Feodor Dostoevsky’s characters in the case.

“It is rather like the beginning of Crime and Punishment in the sense that we are all confident of the culprit – and the only question is whether he will confess or be caught,” he said.

He connected the collective expulsion demarche with the success of the Global Britain concept, suggesting UK expansion all over the world and promoting an “unconditional and immoveable commitment: that we will stand by you as you have stood by us.” According to him, “It is fundamentally in the interests of the British people because it is by being open to the world, and engaging with every country, that the British people will find the markets for their goods and services and ideas.”

According to him, the UK can take credit for a weapon which is “more effective in the world of today” than poisonous nerve agents – lightsabers from Star Wars.

“That tells you all you need to know about the difference between modern Britain and the government of Vladimir Putin. They make Novichok*, we make light sabres. One a hideous weapon that is specifically intended for assassination. The other an implausible theatrical prop with a mysterious buzz. But which of those two weapons is really more effective in the world of today?” he asked rhetorically.

Twitter couldn’t miss out on these gems. Some enjoyed the cultural references.

That’s a hell of a quote.

Boris Johnson, speaking of the Skripal case, compared Russia with Rodion Raskolnikov: "It's like the beginning of" Crime and Punishment "- we all know who the criminal is, and the only question is whether he admits himself or he will be caught." Strong and accurate metaphor https://t.co/4Xp9lrV7rh

Others were less surprised and impressed.

And Boris Johnson is in his element #Russia https://t.co/go6GWQDTiX

Wow… I can't believe he actually said that. What is his plan? to attack Putin with Jedi light sabers?

Agent 007, Downing Street has licensed you to use the FORCE.

Proof of Scripal poisoning by Russia from Boris Johnson: annexation of Crimea, intervention in Ukraine, downing of flight MH17, cyber-attacks, attempted coup in Montenegro, concealing of chemical attacks in Syria, hacking of the Bundestag & interference in other’s elections.🙃🙃

@BorisJohnson, @Theresa_May & Of Course @SkyNews
Why do you so desperately avoid providing the "Evidence" that #Russia & now other #EU members are asking to see?
It's not, or at least shouldn't be, a difficult thing to provide "Proof"; OR IS IT? 🤔🇬🇧https://t.co/obQtHzCVWz

Is that really the best he can come up with? FFS

On March 4, Skripal and his daughter Yulia were found unconscious on a bench at a shopping center in Salisbury and are currently being treated for exposure to what UK experts believe to be the A-234 nerve agent. The UK has claimed that the substance was developed in the Soviet Union and has accused Russia of orchestrating the attack.

The UK expelled 23 Russian diplomats and called on other countries to undertake the same measure. 27 countries, including most EU members, several other European states, as well as the US, Canada and Australia have followed the UK’s example.

*Novichok is a nerve gas, which is more commonly known as A234