Repeal of 2nd Amendment May Open for 'Tyranny, Mass Murder by Gov’t' - Academic 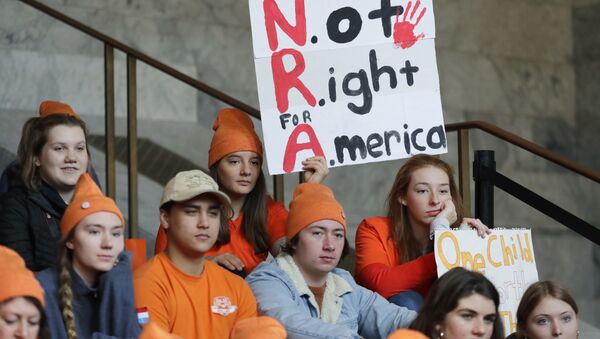 On March 28, US President Donald Trump stressed that the Second Amendment, which protects the right of Americans to keep and bear arms, would by no means be repealed.

Referring to rallies in which many people had taken to the streets across the US on March 24 in response to the Parkland high school shooting, Donald Trump emotionally exclaimed: "As much as Democrats would like to see this happen, and despite the words yesterday of former Supreme Court Justice Stevens, NO WAY. We need more Republicans in 2018 and must ALWAYS hold the Supreme Court."

"Tyranny and mass murder by government are made possible when the people are deprived of their right to arms," David Kopel, Associate policy analyst, research director at the Independence Institute and adjunct professor of Advanced Constitutional Law at the Sturm College of Law at Denver University, told Sputnik.

Another speaker, Philip J. Cook, ITT/Terry Sanford Professor Emeritus of Public Policy Studies at Duke University, also speculated on why there is no reason to abolish the Second Amendment, which has raised controversy following the deadly Florida school massacre. He said that the law, in essence, meets both stances: on the one hand, it guarantees the citizens’ basic civic right to keep arms and on the other, it does not contradict any additional regulations "on the design, possession, and use of guns."

"The Second Amendment is compatible with these regulations," he added. Cook continued by saying that at this point, the Congress, as well as the states, could narrow down the amendment by putting a ban on, for instance,  "military style" weapons, or "possession by youths and criminals."

"These and other regulations are acceptable under the Supreme Court’s current interpretation of the Second Amendment," he rounded off.

On Saturday, people from all over the United States rallied in the capital and other cities demanding that Congress and local legislative bodies pass laws that would put a halt on gun violence. To this end, three days later, retired Supreme Court Justice John Paul Stevens authored an opinion piece for the New York Times in which he called on the demonstrators to demand the repeal of the Second Amendment.

The Second Amendment to the United States Constitution secures the right of citizens to keep and bear arms. It was adopted on December 15, 1791 being one of the first ten amendments taken from the Bill of Rights. The Supreme Court of the United States has ruled that the right belongs to individuals, but has limits. Neither local governments, nor the federal authorities may infringe this basic right, according to the Constitution.

On February 14, former student Nikolas Cruz fired a semi-automatic rifle at students and teachers in a Parkland high school in Florida. The bloodcurdling attack left 17 people dead and another 17 injured.