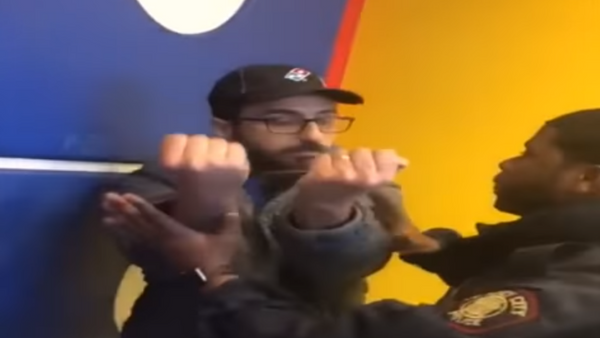 © Screenshot/Real Jersey City
Subscribe
Two officers with the Jersey City Police Department were suspended Wednesday without pay after they harassed a Domino's Pizza manager late Tuesday over a failed delivery.

Footage of the incident shows Jersey City police officers Rodney Clark and Courtney Solomon storming into the restaurant and later pushing manager Mena Kirolos up against a wall. The altercation, which was caught on the pizzeria's surveillance system, was also recorded by a fellow Domino's employee.

​Kirolos can be heard in the cellphone footage repeatedly telling one of the officers to "remove your hands," before the second officer intervenes and eventually suggest the three step outside to discuss the issue. After a brief conversation outdoors, the ordeal ended.

The manager later explained to NBC New York that the driver had gone to the destination given by officers, but made the decision to leave after no one came to pick up the order. Kirolos later received a call from an officer complaining about the mishap.

"He said he was coming to my store, so I waited 10, 15 minutes, no one showed up," he recalled. But by the time cops arrived on the scene, things immediately escalated.

"[I was thinking] ‘What can I do?'" Kirolos told the station. "He's a police officer. I can't do anything back."

Kirolos later remarked that all he wanted from the officers was an apology for the harassment.

The incident earned both officers suspensions after it was reported to the Jersey City Police Department, which then reported the altercation to the Prosecutor's Internal Affairs Unit of Hudson County.

"The Prosecutor's Office will fully investigate the allegations against these officers and prosecute in accordance with the law to ensure that justice is served," said Hudson County Prosecutor Esther Suarez in a Wednesday statement. "Officers who abuse their power and break the law must be held accountable for their actions."

Both officers are also being charged with terroristic threats, disorderly conduct and harassment. They are scheduled to appear in court April 11.