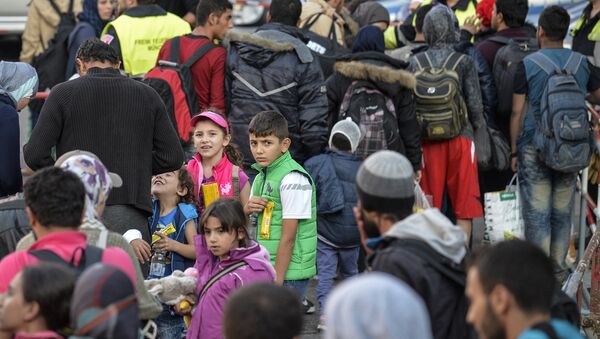 While the new Interior Minister Horst Seehofer came under fire for saying "Islam Doesn't Belong to Germany," discussions over the failure of Angela Merkel’s migrant policy have taken another turn.

Emma, who moved from eastern Kazakhstan to Bavaria many years ago, had to get used to her new homeland. One of the key values there is readiness to help those in need, refugees. She first got acquainted with this during the Balkan crisis and her neighbors from a refugee hostel, who fled from the war in former Yugoslavia, surprised her as they preferred long talks at night to working in the days.

She doesn’t oppose the government helping them, but she points out some of newcomers don’t seem to need help.

“The majority are not refugees; they have come to Europe for free stuff, to get social provision. They depend on governmental support, and some parties even help them to get around the laws,” she told Sputnik, questioning why the federal government uses her taxes to provide for those who don’t want to contribute to society.

Although Chancellor Angela Merkel admitted that the multiculturalism concept had failed during her first term in 2010, she made another attempt to deal with the disagreement among the country’s various minorities and the German nationals a few years late.

She announced the “open borders” policy in 2015, letting in thousands of people from Africa, Asia and the Middle East and urging native European to help the newcomers. This made Germany the key destination for thousands of refugees and immigrants coming to Europe. Some 280,000 refugees came to Germany in 2016, compared to 890,000 arrivals in the previous year, according to the German Interior Ministry. The majority of the asylum seekers are from Syria and Afghanistan.

Concerns over the chosen course rose amid news of crimes committed by migrants.

For example, in late December 2017, a 15-year-old asylum seeker from Afghanistan killed a local girl of the same age in the German town of Kandel, sending shockwaves through the community and bringing together anti-immigration demonstrators.

Before that, after the 2016 New Year’s celebrations, hundreds of women complained about street harassment in Cologne. Police later discovered that most of them had North African origin.

Another point in the debate is growing public spending. The German government in 2016 spent about 21.3 billion euros (almost $23 billion) in its efforts to overcome the migration crisis in Europe, according to reports of the local outlet Zeit.

Despite rising discontent over the question, Merkel was able to secure a plurality during the recent 2017 federal parliament elections. However, the right-wing party Alternative for Germany (AfD), which put stricter migration policy on their agenda, scored a historic third place in the vote.

Cultural differences are not exclusively a German issue. The urge for stricter migrant policies has brought Eurosceptic parties all over Europe historic success. Marine Le Pen became the first runner-up in the 2017 presidential election. The 2018 parliamentary elections was a success for right-wing parties.

Anthropologist Yulia Okun, who came from Russia to Italy, says the notion of multiculturalism was given up long ago.

She stated the notion wasn’t brought up during the Italian campaign, saying “They rather stressed that Europe has abandoned Italy with the refugee problem. One of the slogans stated “Fewer refugees, more tourists.”

She also points out that although many people in Russia think that Europe is dying, stormed by migrants, people there speak about “Fortress Europe,” which doesn’t let the aliens in and deports those who don't get asylum.

However, Alberto Palladino from the CasaPound movement, referring to a neo-Nazi group, claims the authorities are “destroying the traditional culture” for the sake of integration.

“I think there are some political groups which do this following their own economic goals and craving more influence,” he told Sputnik.