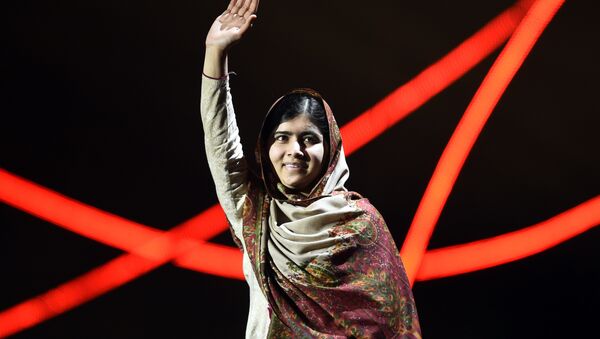 © AFP 2021 / ODD ANDERSEN
Subscribe
The Nobel laureate Malala Yousafzai, a global icon of girls’ education, was given a rousing welcome on social media by fans in Pakistan and India, with experts calling her a sign of hope for South Asian children and their future.

"Malala is not just a name, she represents the hope and aspirations of many children of South Asia who continue to suffer from the religious, caste and bigotry laws forbidding equal opportunities for their growth," Shiney Anil, Program Officer of Jovita, a child rights and protection organization working in India told Sputnik.

According to local news reports, Malala and her family met Prime Minister Shahid Khaqan Abbasi in the capital, Islamabad. She is, however, unlikely to visit her hometown in northwestern Pakistan due to security reasons.

READ MORE: In the Firing Line Again: Malala Criticized Over Jeans and Boots

Reuters quoted Malala's unnamed relative as saying that although the Nobel laureate wanted to go home, she was denied permission by the Pakistani authorities, who took her safety into consideration.

Pakistani television channel Geo TV telecasted footage of Malala arriving at Islamabad airport and being escorted out in a car amid tight security.

Malala, now 20 years old, was awarded the Nobel Peace Prize in 2014 for championing the cause of women's education in Pakistan. The youngest Nobel laureate now lives in Britain and is pursuing higher studies at Oxford University.

In 2012, a short time after Malala wrote a popular blog on the BBC Urdu service advocating girls' education, a group of Taliban gunmen intercepted the school bus she was traveling in with her friends and reportedly asked: "Who is Malala?" After identifying her, the gunmen shot her in the head. Malala, then in her early teens, miraculously survived after her treatment in Britain, and lived on to become an icon of girls' education and child rights.

Her innumerable fans from India and Pakistan, including celebrities, took to social media to welcome their hero back to Pakistan.