There are no obstacles to Turkey's use of Russian-made S-400 air defense systems along with US Patriots and Franco-Italian Eurosam SAMP-T defense systems, Turkish academic Mesut Hakki Casin told Sputnik. According to Casin, the US threats over Ankara's purchase of the S-400 are an attempt to impose pressure on Russia and Turkey.

"As you know, Turkey and Russia are implementing the Akkuyu nuclear power plant joint project," Casin said. "A nuclear power plant is a vital installation from a military-strategic point of view. In this regard, I believe that the S-400 systems will be effectively used to protect this nuclear power plant. Turkey has decided to purchase these units, keeping in mind these considerations."

The Turkish academic presumed that the acquisition of the S-400 by Turkey will not damage the country's alliance with NATO.

Casin reminded that Turkey decided to purchase Russian-made S-400 systems along with Franco-Italian Eurosam SAMP-T defense systems. "Turkey is not the only NATO country that uses Russian defense missile systems," the retired Air Force officer stressed. "Today Russian missile defense systems are being used by seven NATO member states, including the countries of the former Eastern Bloc and Greece."

Turkish Defense Minister: S-400 Deal Will Not Affect Talks on F-35 Deliveries
Meanwhile, the US is trying to persuade its NATO ally to abolish the purchase of the Russian-made missile defense systems and buy MIM-104 Patriot surface-to-air missile (SAM) systems, citing incompatibility between the S-400 and alliance's standards.

Furthermore, on March 17 a group of US lawmakers led by Senator Bob Menendez (D-NJ) informed the State Department that the acquisition of the Russian S-400 air defense systems should lead to punitive measures, as stipulated in the Countering America's Adversaries Through Sanctions Act (CAATSA).

The CAATSA bill was inked into law by US President Trump in August 2017 in response to allegations that Russia sought to influence the 2016 presidential election. Washington has started imposing restrictions in accordance with the new legislation since January 29, 2018.

"If Turkey urgently needs these [Patriot] missiles, the [Turkish] government will make an appropriate decision and these missiles will go into service in Turkey," Casin said. "On the other hand, the [Patriot] battery is currently being deployed on the territory of Turkey as part of the NATO system that provides air defense to Turkey."

The academic noted that Ankara is aware of Washington's concerns regarding Turkey's purchase of the S-400.

"[However], if the US really wants to sell Turkey these [Patriot] missiles, why, then, have the negotiations been going on for 10 years? Why has Washington hesitated to take this step earlier? Why have they raised the issue of selling the Patriot [surface-to-air missile system] after Turkey decided to buy the S-400?" the retired military officer asked rhetorically. 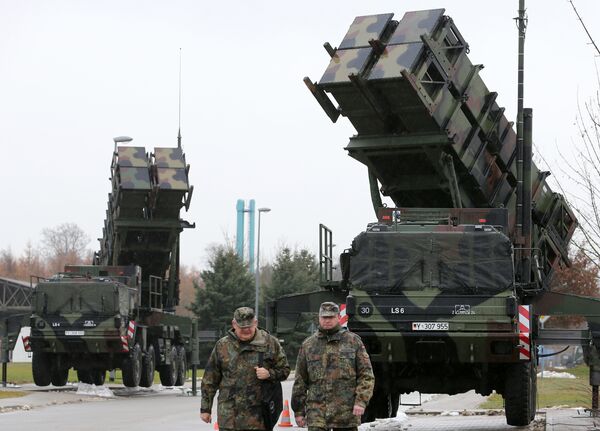 According to Casin, Ankara could use the Russian-made S-400, Franco-Italian Eurosam SAMP-Ts and America's Patriots simultaneously.

US Senate Warns Russia of Sanctions if S-400 Sold to Any Foreign Nations
"It depends on… whether Turkey awaits a threat at low and medium altitudes, and how it intends to withstand missiles launched from the sea, land, including cruise missiles," he elaborated. "It also depends on satellite reconnaissance and our airborne radar system. Turkey possesses all the necessary resources to use all three systems — the S-400, the SAMP-T, and the Patriot. The truth of the matter is that the situation on the Iraqi border and the operation in Syria have revealed an urgent need for an air defense system."

Commenting on the information about possible US sanctions over the purchase of the S-400, the academic suggested that the US wants to exert considerable pressure on both Russia and Turkey. However, Ankara has already made its decision, he stressed. Citing the Russo-Turkish agreement of 1996, the academic stressed that there are no obstacles for Turkey to acquire Russian arms from the point of view of international law. He highlighted that the S-400 is a defensive weapon.

According to the retired Air Force officer, the Russian-made anti-aircraft system will not be integrated in the NATO defense network but will serve as an important element of Turkey's national air defenses.

Moscow and Ankara inked a loan agreement for the acquisition of four S-400 air defense missile battery systems in December 2017. The initial delivery of the Russian-made advanced missile system to Turkey is planned for the first quarter of 2020. The air defense systems will be operated by the Turkish Armed Forces independently of Russia.

The views and opinions expressed by Mesut Hakki Casin are those of the contributor and do not necessarily reflect those of Sputnik.