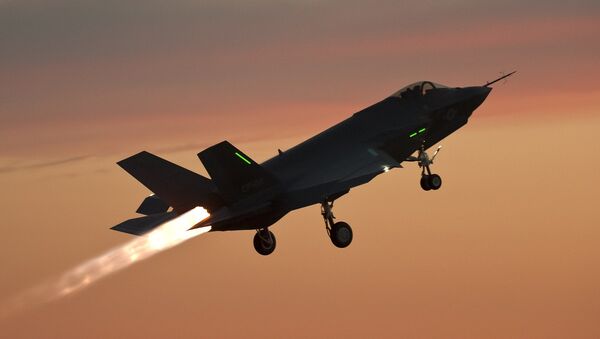 CC0 / /
Subscribe
A scandal is brewing in Brussels over the government's decision to replace its fleet of F-16 fighters, in spite of a 2017 report by Lockheed Martin which found that the planes' service life could be extended by at least another six years.

A leaked 32 page cabinet document from 2015 has confirmed that the Defense Ministry was lobbying in favor of Belgium's purchase of 5th generation fighters which would allow the Air Force to use tactical nukes in stealth mode, Belgium's De Standaard has reported.

Speaking to the newspaper, Dirk Van Der Maelen, a member of parliament from the opposition Flemish Social Democratic Party, said that the confidential document, titled "General Guidelines of the MOD," confirmed that the defense ministry sees tactical nuclear capability as an important feature, contrary to Defense Minister Steven Vandeput's earlier suggestions that this was not the case.

"The choice of the F-35 was already fixed in 2015. Minister Vandeput has always denied that the ability to carry nuclear weapons was an important criterion for the choice, but this does not seem to be correct," Van Der Maelen, who has seen the document, said.

Turkish Defense Minister: S-400 Deal Will Not Affect Talks on F-35 Deliveries
Offering praise for fifth-gen fighters, in spite of purchase and operational costs multiple times that of the F-16, the document complains that fourth generation planes don't have the ability to drop tactical nuclear bombs in stealth mode. Nor do they have sufficiently sophisticated electromagnetic countermeasures, nor the ability to detect and defeat enemy radar. "This is possible only in 5th generation fighters," the report stressed, without directly referring to the F-35 by name.

Defense Minister Vandeput dismissed the leaked document as meaningless, saying it was just one of a series of drafts circulated at cabinet meetings during work on the 2016-2030 defense strategy.

Last month, Russian Foreign Minister Sergei Lavrov marked Moscow's concern over training exercises involving the use of American nuclear weapons by its NATO allies. According to Lavrov, such drills hamper the possibility of further nuclear disarmament, have a destabilizing effect on European security and mark a breach of the Treaty on the Non-Proliferation of Nuclear Weapons. Moscow has no illusions that such exercises amount to preparations for using these weapons use against Russia, Lavrov stressed.

000000
Popular comments
Belgium ? Am horrified by your alleged bad thoughts, you a minuscule country with nothing. But remember, you can get out of IT....if you really want to.
armor
28 March 2018, 19:42 GMT3
000000
This is exactly what we need in Europe, that a country on the verge of collapse get's the ability to drop nukes on..... wait who is threatening Belgium at this point ???? I wonder hmmmmm?