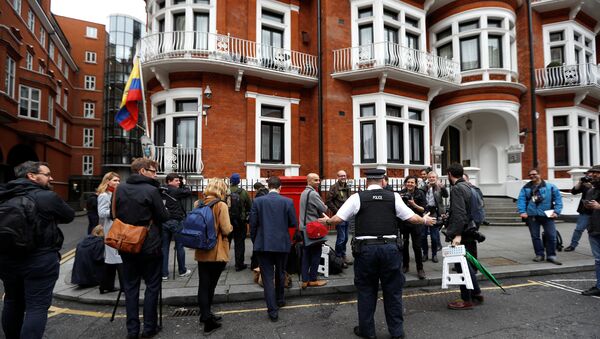 © REUTERS / Peter Nicholls
Subscribe
Kim Dotcom and other Assange supporters have called on people to gather outside the country's embassy in London, to force authorities to restore the internet connection for the WikiLeaks founder.

The government of Ecuador said on Wednesday that it had switched off outside communications for WikiLeaks founder Julian Assange, who is currently staying at the Ecuadorian embassy in London.

"The government of Ecuador has suspended the systems that allow Julian Assange to communicate to the outside of the Ecuador embassy in London… The measure was adopted due to Assange not complying with a written promise which he made with the government in late 2017, by which he was obliged not to send messages which entailed interference in relation to other states," the government said in a statement.

Assange allegedly posted his latest tweet before the announced disconnection on Tuesday, March 27, responding to an insult during a question and answer session in the UK House of Commons.

Assange's Supporters Call on People to Gather Around Embassy

Kim Dotcom, a former owner of the largest file-sharing company Megaupload, has earlier reported that WikiLeaks founder Julian Assange has had his internet connection cut off in the Ecuadorian embassy in London, where he is currently located. He urged Assange's supporters to gather outside the embassy.

Following this call, former Greek Minister of Finance Ioannis Varoufakis has also urged people to rally around the embassy to force authorities to restore his internet connection.

No official statement or any other information has been issued either by Assange himself or by the WikiLeaks so far.

Demand “Reconnect Julian”
Until Julian is back online
Thank you

WikiLeaks founder Julian Assange has been residing at the Ecuadorian Embassy in London since 2012 for fear of being extradited to Sweden on sexual abuse allegations. On December 4, 2015, the UN Working Group on Arbitrary Detention's (WGAD) ruled that Assange's detention was arbitrary. The United Kingdom and Sweden refused to recognize the legitimacy of the decision and to drop the charges against Assange.

In February, a UK court refused to scrap the UK warrant for Assange's arrest over his breach of bail terms, although Sweden, which launched the original investigation against the activist, dropped the case against him in May last year.

000000
Popular comments
Following the UK storming this matter should be solved by Ecuadorian President Lenín Moreno proper.
alvaro.marfan
28 March 2018, 21:51 GMT
000000
i wouldn't be surprise if he is a double agent, probably with a microchip on his head to collect information.