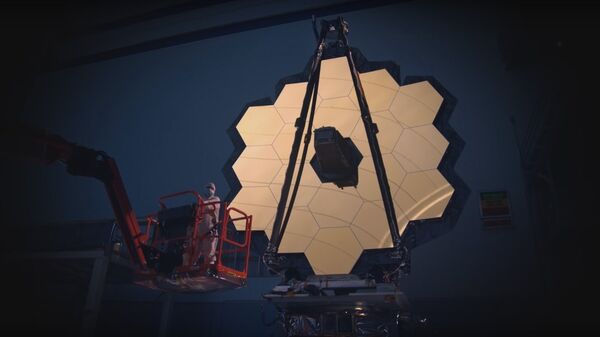 © NASA . NASA Goddard (screenshot)
Subscribe
International
India
Africa
The much-hyped James Webb Space Telescope (JWST) has been delayed almost a year until May 2020, NASA announced. The delay marks yet another setback in the development of the space telescope, which was supposed to launch in October 2018.

Development of the JWST has been ongoing since 1996. It's a joint project between NASA and the European and Canadian Space Agencies, and is supposed to tell us different things than its predecessor, the Hubble Space Telescope (HST). While 100 times more powerful than Hubble, the telescope will be stationed too far from earth to be serviced by astronauts. It'll also be only half the size of HST even though its primary mirror will have a collecting area roughly five times bigger.

JWST is especially useful compared to ground-based telescopes which are prone to picking up elements in Earth's atmosphere when looking through our atmosphere.The telescope will be able to probe black holes and see infrared, which can help determine things that happened in the past, even as far back as the "cosmic dawn" of the universe, as scientists call it.

​The telescope was promoted at the South By Southwest technology festival just weeks ago, when it was said that it would help answer questions like how our galaxy was formed and when the transformation of universes occured.

Unfortunately, it appears humanity will have to wait a bit longer for those answers now that the telescope is officially late and over-budget. The project — the most complicated space-science telescope ever built — is now expected to surpass the $8 billion limit set by Congress, as it is already at a cost of $7.3 billion. If that happens, Congress will have to re-approve the project. NASA didn't provide a new budget figure, but experts say it could be several hundred dollars million more, according to Nature Magazine.

​So what's the holdup? NASA says that engineers need more time to assemble spacecraft components. Also, the sheer scale: the mirror is 6.5 meters long compared to the Hubble's 2.4 meter mirror. Getting that into space is no ordinary task. According to a 2013 video posted to the James Webb Space Telescope's Youtube page, "the answer is origami," which requires folding Webb's mirrors inside the actual rocket that launches it. Meanwhile, the collapsible sun shield that protects the mirror, itself the size of a tennis court, took weeks longer than expected to fold in testing.

And we don't wanna know how many years bad luck it is if they break it.

According to the US Government Accountability Office, Northrop Grumman, who is developing parts of the telescope for NASA, has staff working three shifts, 24 hours a day, to handle the setbacks.

Last year, a technician used too high a voltage during a test and damaged the propulsion system. Other "workmanship" issues led to errors in the mirror's sunscreen last year as well.

The telescope was supposed to launch in 2007 — and every year since besides 2012 and 2017 — but has been repeatedly postponed.

American astronomers ranked the project as the most important large space mission in both 2000 and 2010 on 10-year surveys. The second largest priority was the Wide-Field Infrared Survey Telescope (WFIRST). NASA had hoped to start allocating more funds to WFIRST as JWST wrapped up, which it is no longer doing.

US President Donald Trump proposed scrapping WFIRST's funding in his budget proposal, as well as US participation in the International Space Station, but Congress restored it. A month later, March 13, Trump proposed the creation of a "Space Force" branch of the military, but made no comments about the future of the telescopes.