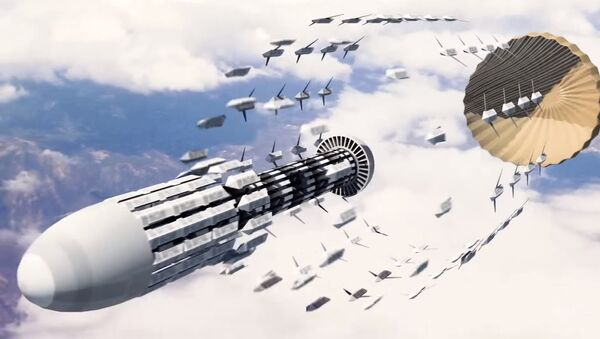 © Photo : Youtube / AFResearchLab
Subscribe
International
India
Africa
Last year, US Secretary of the Air Force Heather Wilson pledged to do more to modernize and technologically enhance the the country's combat planes by 2030.

The US Air Force Research Lab has released a video showing details of a possible US airstrike on enemy positions in the foreseeable future.

In the footage "The Call to Action," a state-of-the-art F-35A fighter jet serves for the first time as a piloted mothership. It carries out a combat mission accompanied by a number of semi-autonomous drones, which destroy the air defenses of an imaginary enemy.

Such a tactic may be used by the US Air Force during suppression of enemy air defenses (SEAD) missions by 2030, according to the US magazine Popular Mechanics.

"The clip is also a plea by US Secretary of the Air Force Heather Wilson, who last year launched an initiative to upgrade the Air Force's science and technology strategy" by 2030, the magazine said.

The F-35A is a modified version of the fifth-generation US all-weather stealth multirole fighter F-35, designed to perform ground attack and air superiority missions.