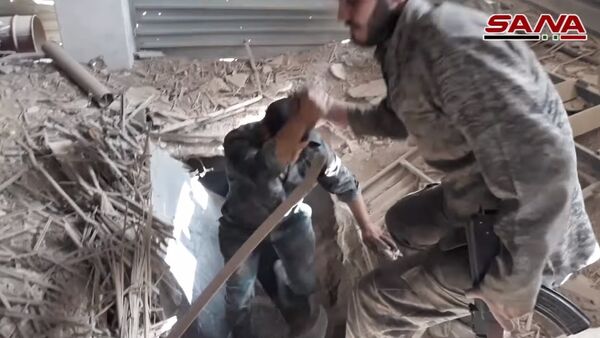 The find comes as the Syrian military wraps up its operation to purge the suburban Damascus region of jihadist militants.

Shot under the towns of Hazza and Ein Tarma, the video footage shows Syrian troops as they examine large stocks of medical supplies, makeshift operating tables, and hazmat suits.

The find follows an earlier discovery of a militant rocket and bomb manufacturing plant built under residential housing in the town of Ein Tarma, as well as tunnels for weapons and ammunition storage, and even a major tunnel wide enough to be used by jihadist fighters to drive vehicles between the towns of Harsata, Douma and Modira.

The Syrian Army is mopping up resistance in Eastern Ghouta. Damascus launched the operation, codenamed Damascus Steel, following repeated rocket attacks on the Syrian capital. Upwards of 90% of the suburb is now under government control, with the militant-controlled pocket divided up into three smaller pockets. Prior to its liberation, the territory had been controlled by militants from groups including Nusra Front*, al-Qaeda's affiliate in Syria, since 2013.

Also on Tuesday, the Russian Defense Ministry confirmed that over 6,700 militants and their families had left Eastern Ghouta via a humanitarian corridor for Idlib province.